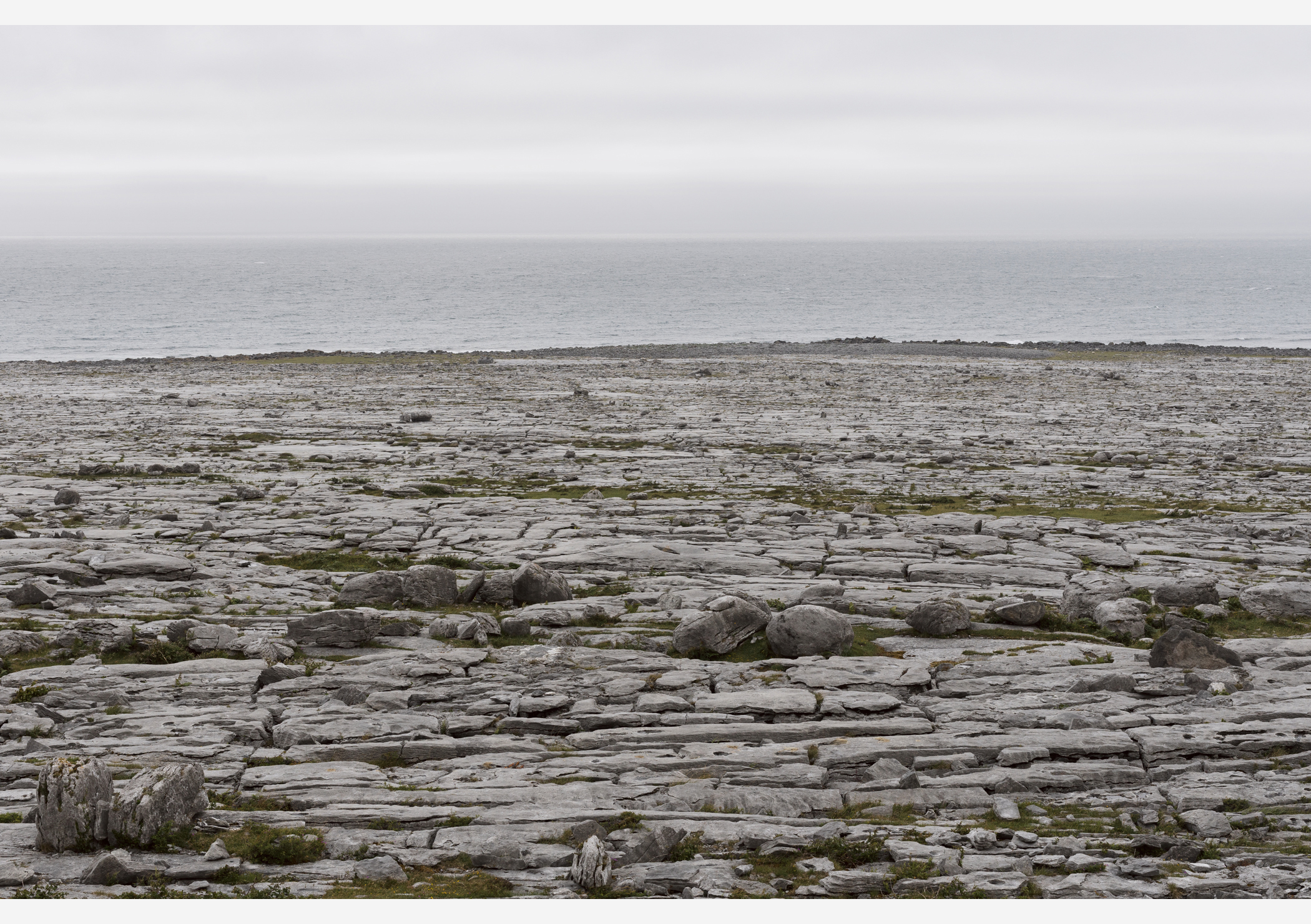 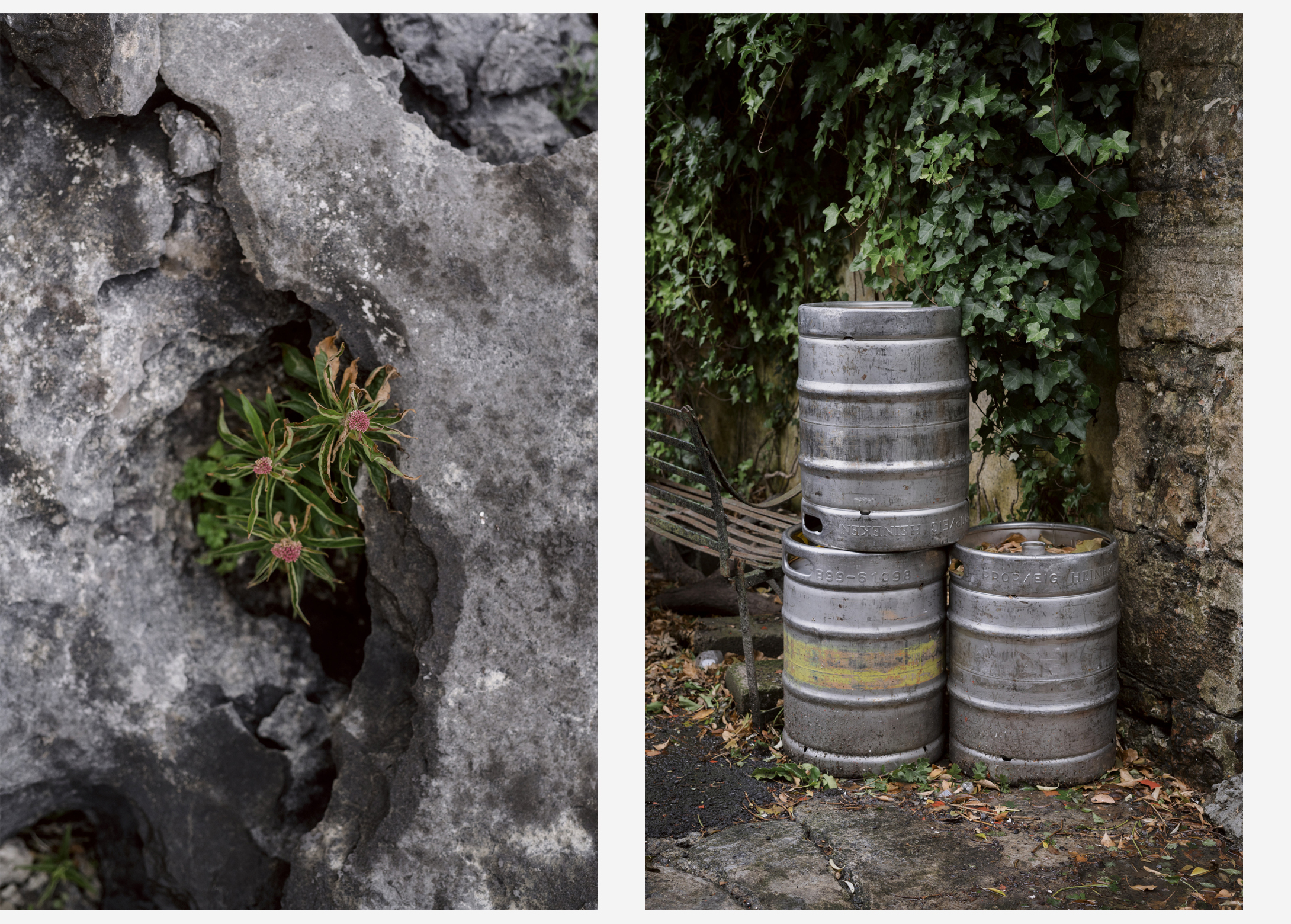 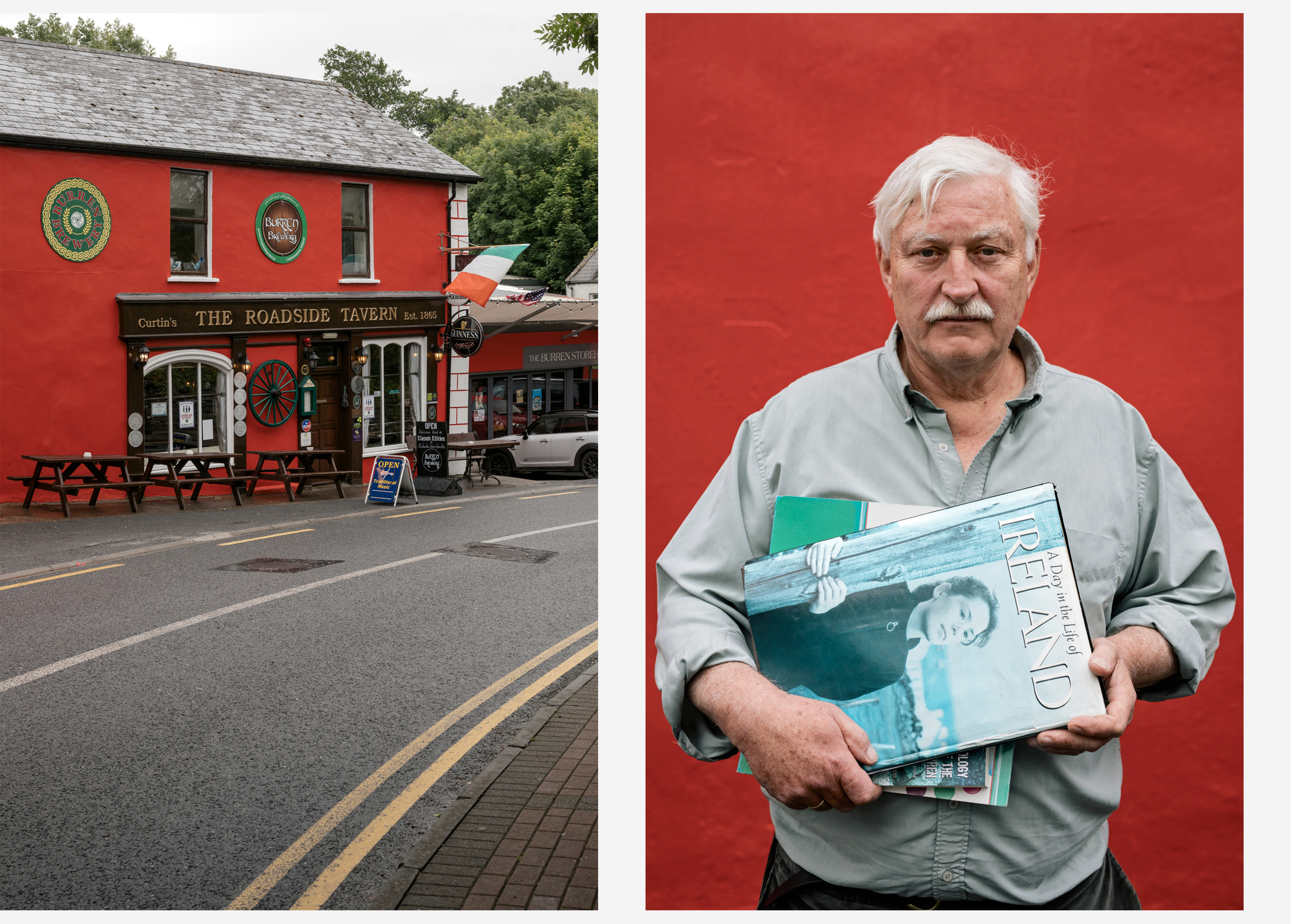 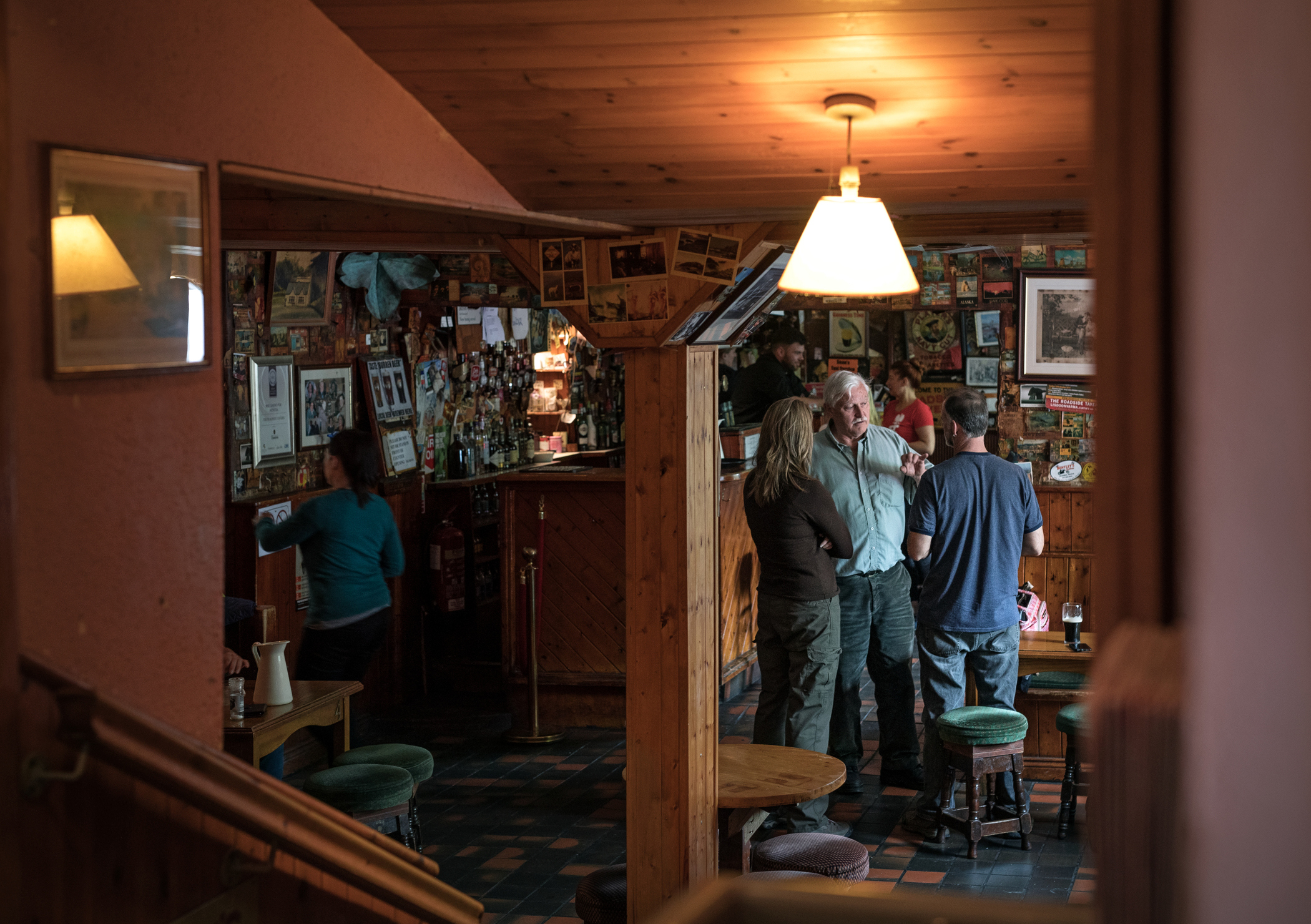 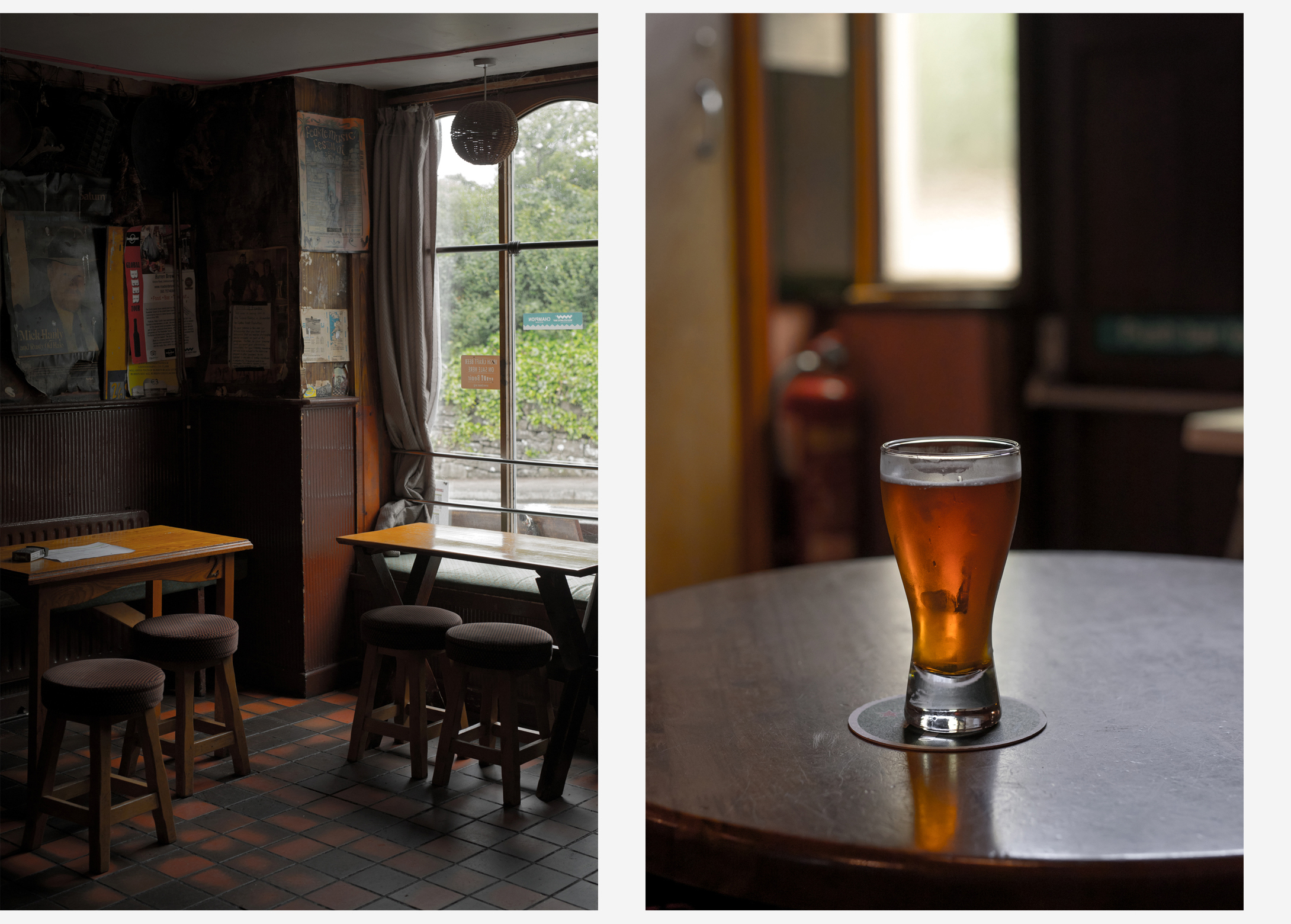 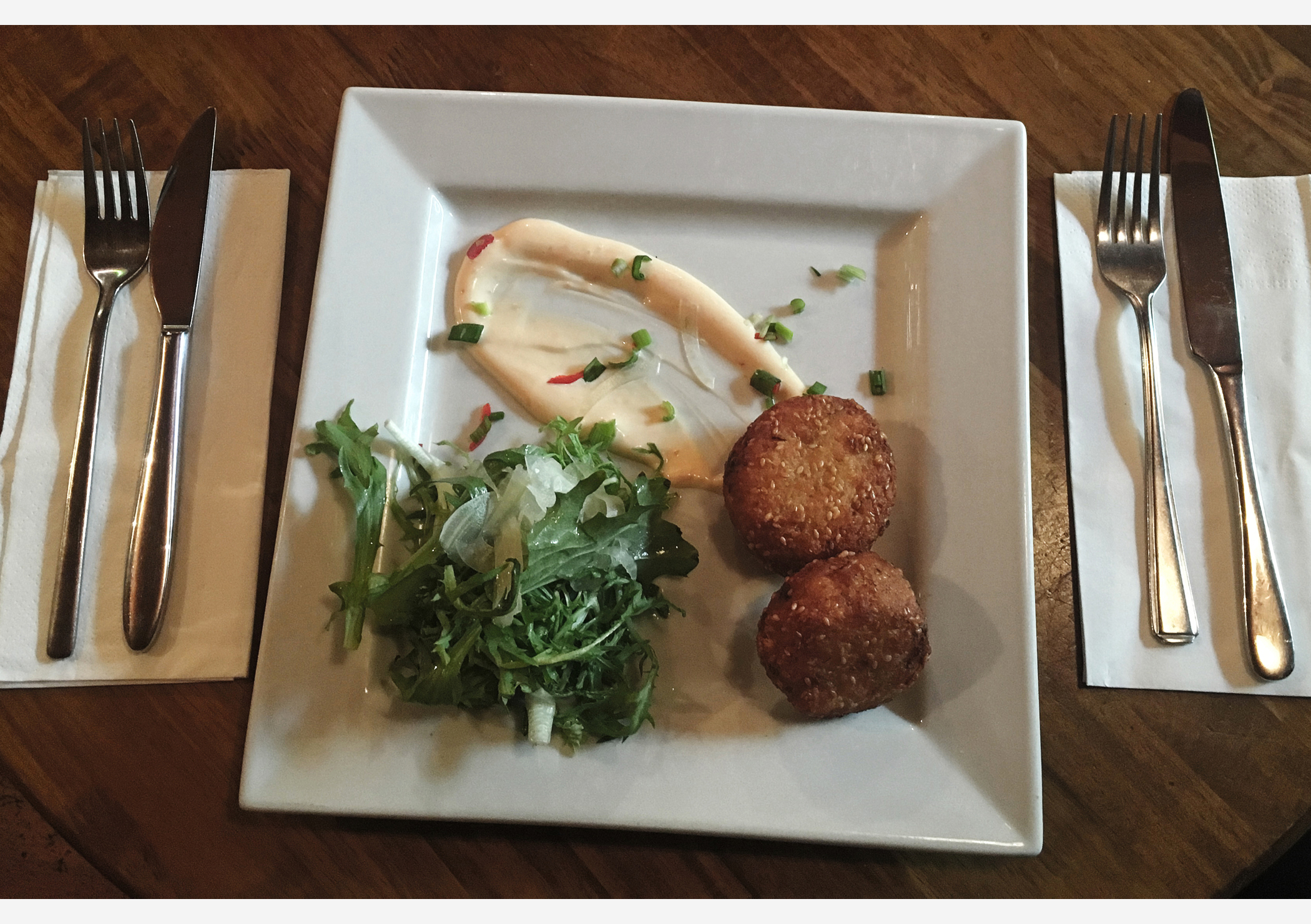 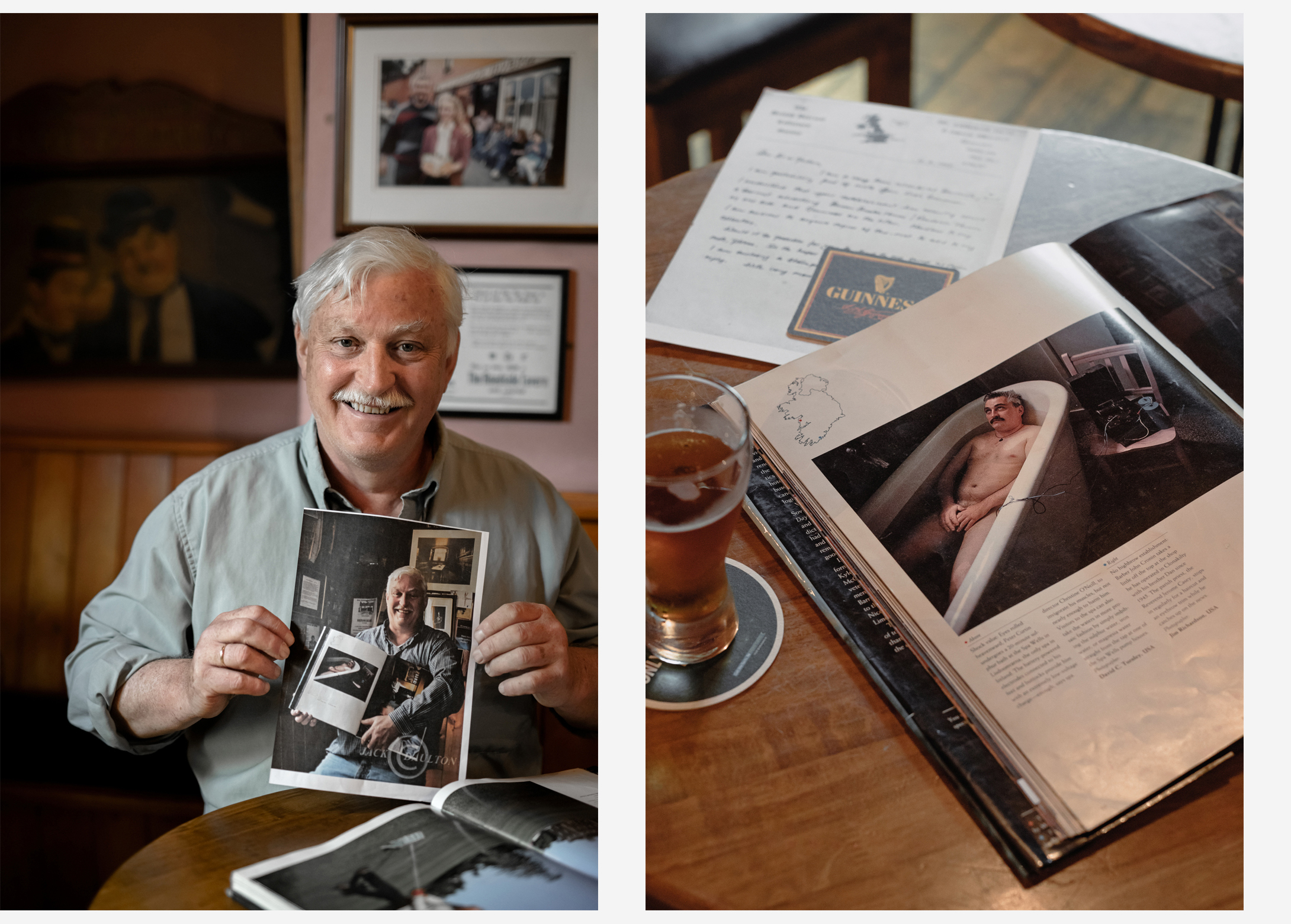 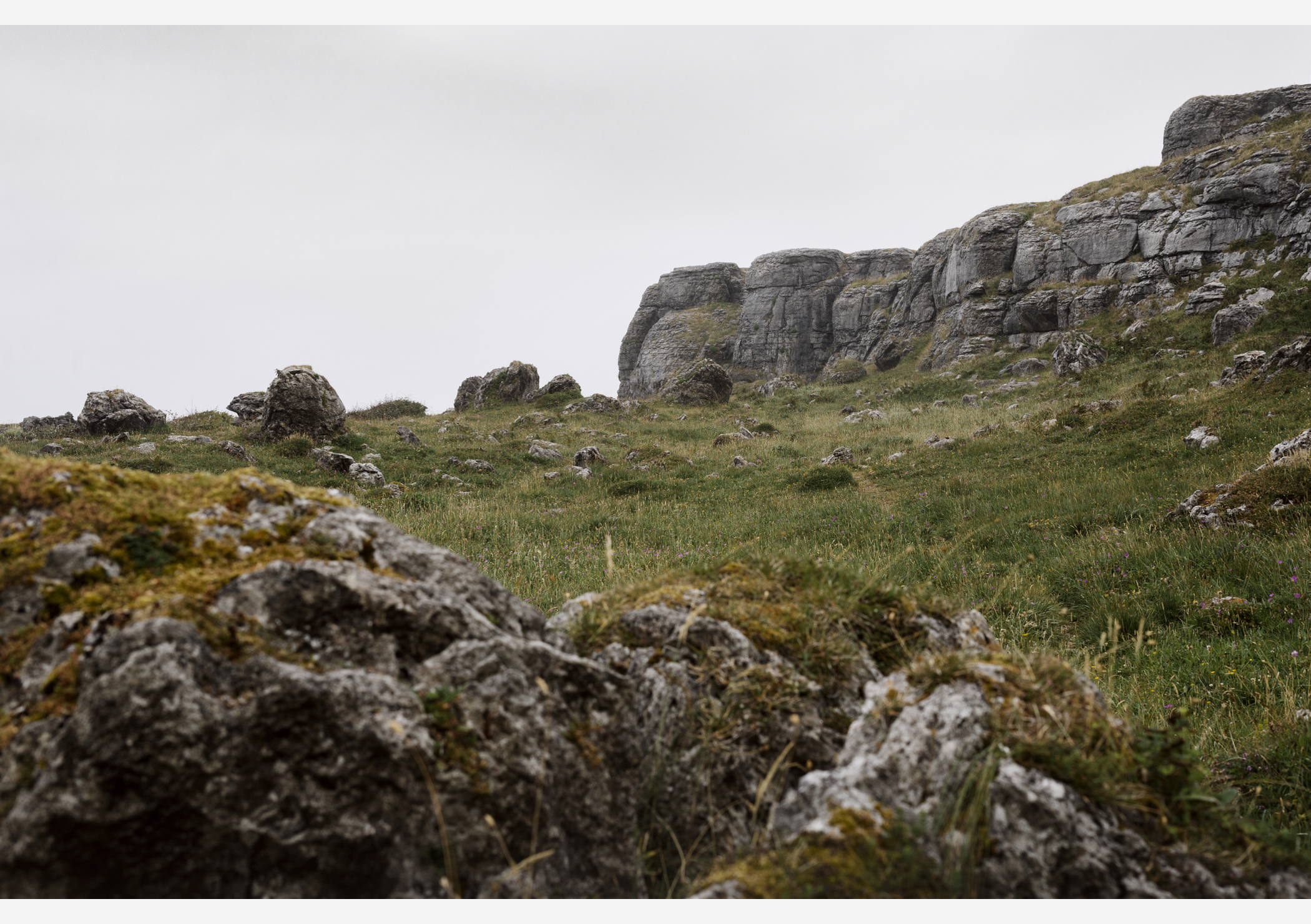 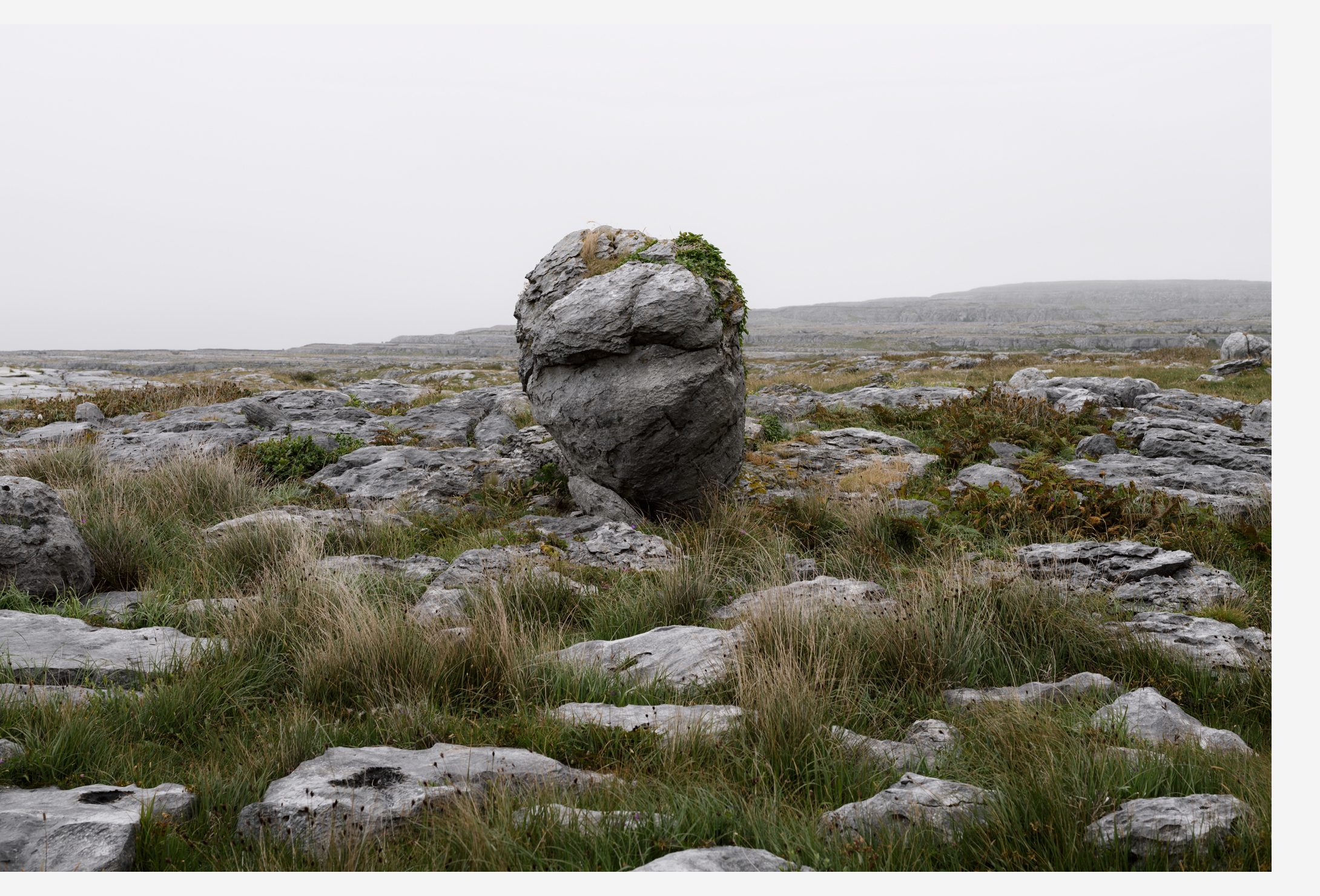 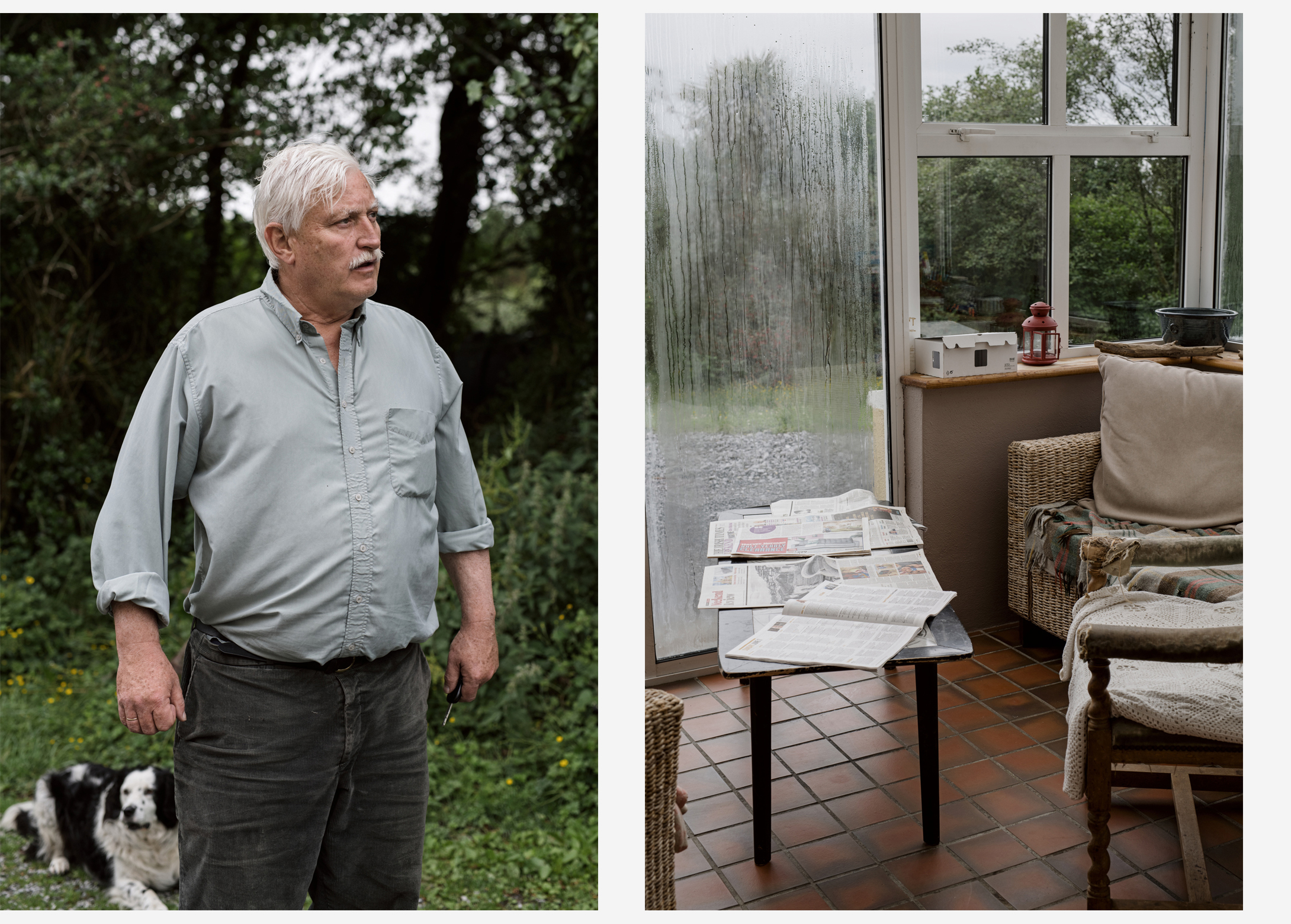 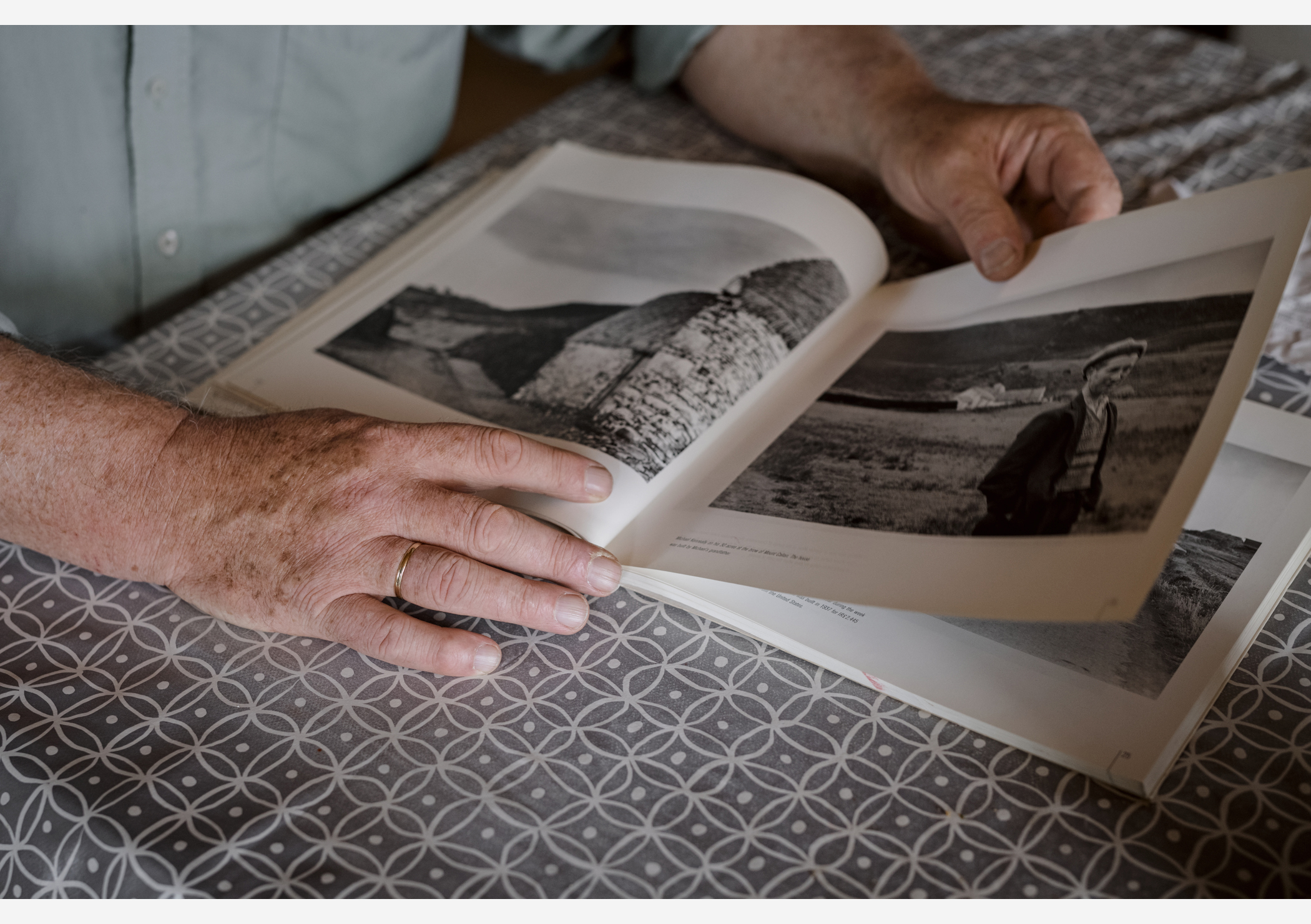 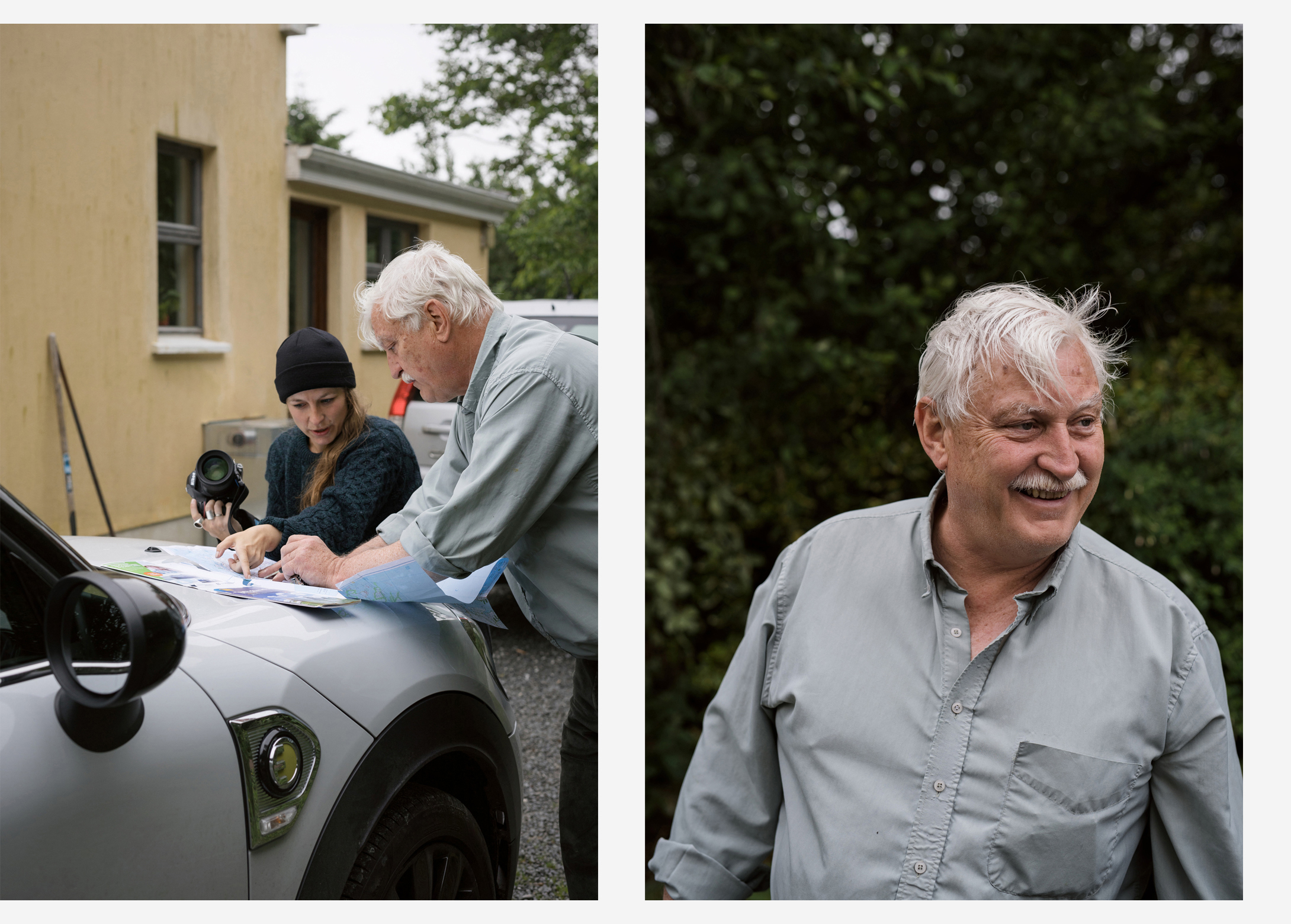 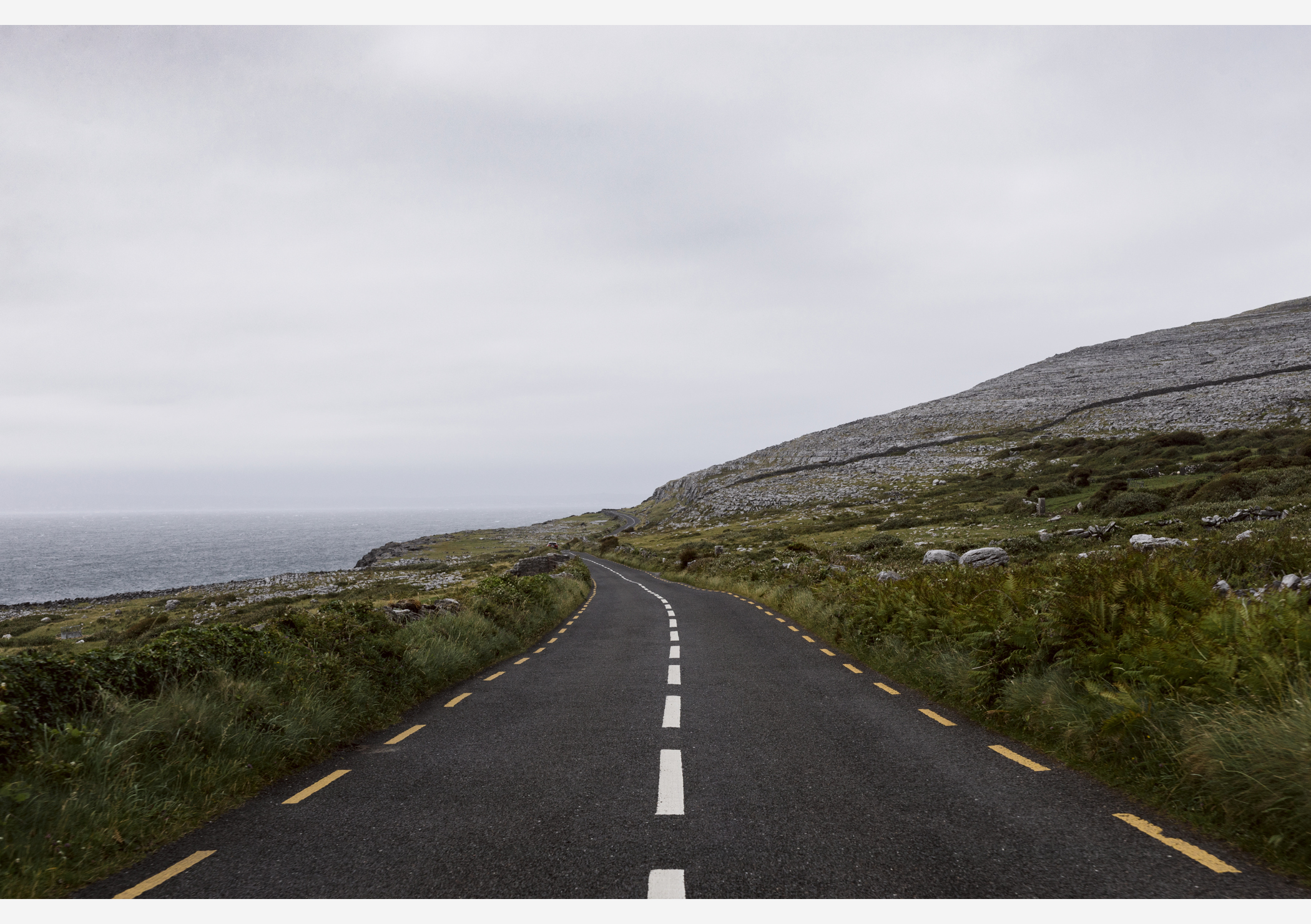 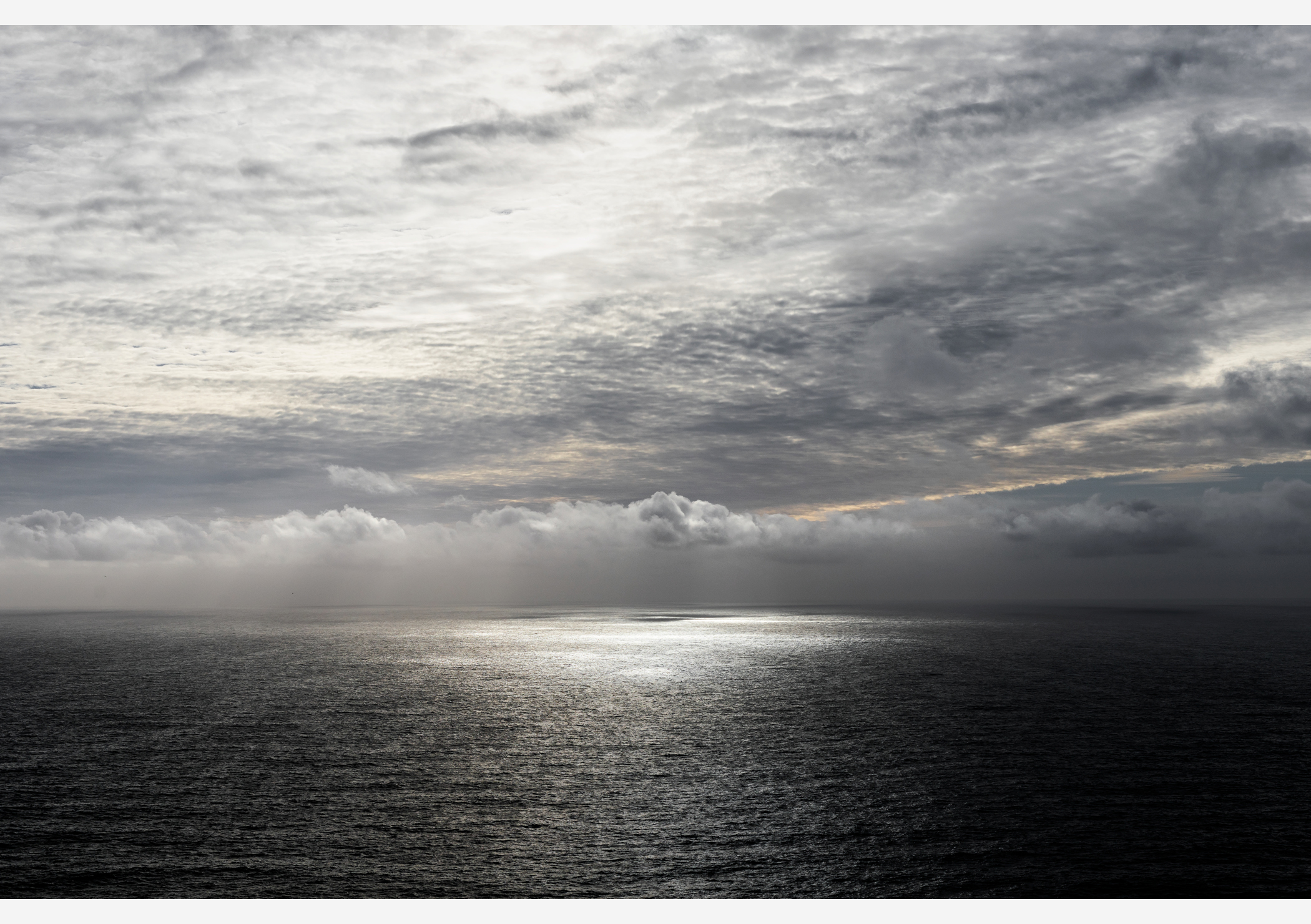 Meeting a local legend of the Burren

What sounds like the beginning of a book about an exceptional hero, will instead be the introduction to our personal story about Peter Curtin, a man of many trades and even more stories. Little did we know that we were about to meet a most colourful person and a true local legend on the day we arrived in Lisdoonvarna, County Clare, Ireland, population 739.

It was the famous Burren Smokehouse, said to produce the best organic smoked Irish salmon, that led us into the village. We arrived hungry and as we found the Roadside Tavern right next to the smokehouse, we thought „why not?“. The rest is history.
Before we even made it into the tavern we were approached by a man: White hair, Irish accent and very curious eyes. „Who are you and what brings you here?“ I recall that we barely managed to tell that we are two photographers exploring the Wild Atlantic Way before he took over and didn’t stop until three hours and many stories later… meet Peter Curtin.

Peter Curtin, or in his native tongue Peadar MacCruitin, truly should be the main character in a book! He would do well as a pirate captain, head of an army, inventor of the wheel or some such. In fact he did serve in the merchant navy and is by now the owner of the Roadside Tavern, as well as the Burren Smokehouse (that one together with his wife), beer brewer in his very own microbrewery and – not to forget – chairman of the Burren Tolkien Society.
As a „welcoming hospitality lies in the nature of the Curtins“ before he finished his first sentence we had a cold beer in our hands.
And it’s true, Peter Curtin indeed was born upstairs the Roadside Tavern in 1953. His grandfather Christopher Curtin, a baker by trade, bought it back in 1893. With his wife he made it a bakery and a pub until 1944, when they handed it to their youngest son John, Peters father. Meanwhile the railway had arrived and Lisdoonvarna flourished. It’s with proud that Peter tells us that his parents managed to survive the post war depression and that due to their efforts nowadays the Roadside Tavern is the only remaining true pub in Lisdoonvarna. We learned only after our visit how well known it really is! And not only for the original atmosphere, but moreover because it keeps the real Irish craic alive, through traditional food, music and feel.

As we make our way through some delicious crab cakes with fennel and lime slaw, Peter continues to tell us about many famous people who visited the pub over the years. Every single wall is plastered with framed images, and he points on one in particular, that shows J.R.R.Tolkien accompanied by a few Irish lads. Peter is convinced that Tolkien took the Burren landscape as a major inspiration for his famous work, and of course he can prove this theory with official studies! For the time a crab cake needs we hear the head of the Tolkien Society speak, before he turns back into the pub owner, who knows every person on every picture on every wall. But as he needs to get a book to continue his story, we find time to take a longer breath and some more sips of that delicious beer… hold it! We’ll tell you all about the beer later!

He returns with a large book and thumbs through it til he finds what he was looking for: 27 years ago Jack Daulton took a portrait of Peter while bathing in a tub of the Lisdoonvarna Spa! Not quite the image we’d expected to see, but as we figure out a great photographic project from the good old days of photography: On May 17th 1991 more than 75 photographers shot over 100.000 images  for the book „A day in the Life of Ireland“ sponsored by the Eastman Kodak Company. Needless to say the book made its way to our home by now and puts a smile on our faces each time we see the bathtub picture.

The crab cakes were only the starter and now the famous baked hot smoked salmon is served on a base of spring onion mash, with wilted greens and a wholegrain mustard cream sauce. Not exaggerating: This was the best meal we had in Ireland! (That verdict has nothing to do with the Euphoria Beer!)
The praise instead belongs to Peters Wife Birgitta, who runs the Smokehouse and Kieran O’Halloran, who established the all local and organic kitchen in the pub. It was in 1981 when Birgitta, a native Swede, practically stranded in Lisdoonvarna on her trip through Europe. Wether Peters storytelling was the main reason remains unknown, but 8 years later, after Peters return from the navy, they developed the smoking process for the smokehouse together, combining the traditional Irish way of smoking with Scandinavian methods. First their salmon was only served in the tavern, then in local hotels and restaurants, soon all over the green island and today all around the globe. The smokehouse won numerous awards for their eco approach and sustainable business and nowadays they are producing nearly 40 tonnes smoked fish a year! Gone are the days with Peter fishing and Birgitta packing the batches herself.
Organic farming makes their fish healthier, as they swim about 24.000 km in their lifetime and are only fed natural foods, which results in less fat but three times more omega 3 instead. Til today Birgitta recalls her Swedish childhood, where she would fish for eel with her father and have smoked eel and herring on any festive occasion.
It really is the combined history of two families that you can taste and actually feel when visiting the Roadside Tavern and the Smokehouse.

Back to the beer now. Euphoria? Yep, that is the name that brewer Peter Curtin gave his very special beer with „magic yeast from a magic hillside“.
He began to notice that Irish pubs were changing and decided to create a „pint of distinction“. And he started his own microbrewery in spring 2011, just upstairs the Roadside Tavern, right where he was born 58 years before. It is the first brewery in County Clare and until today the smallest professional brewery in Ireland. It’s very Irish beer, he creates, not overly dominated by hop, but the actual flavours of the malted barley. The range consists of the Burren Gold Lager, the Burren Red Ale and the Burren Black Stout, „a continuum of the original stouts from the time of my grandfather.“ Well, and the mystical Euphoria, a wild yeast gruit beer, only served in the Tavern. As Peter put it, the brewing is his „labour of love“ as it is fairly complicated and also really time consuming.
After our meal Peter guided us up a narrow staircase, which led the other guests to wish us good luck for our return…
Is Peter really tall or is the microbrewery really tiny? Anyway, we made our way back downstairs safely and finished our last bit of Euphoria. What a day!

But, as you might guess by now, that isn’t yet the end of the story. After a minute or two on the fresh Irish air, Peter made us promise to follow him in his car to his home, where this other book he really needed to show us „has to be!“.
Who could or ever would refuse an invitation by Peter Curtin? Exactly. Hence a few minutes later we find ourselves on a bumpy track to an old charming house. Before stopping our engine we can hear Banjo, Peter’s dog, bark „euphorically“. Only… where is Peter? We feel like breaking into his house, as we are secretly wandering through the back rooms, before finding him in the big kitchen, with said book in hand! It’s „IRELAND“ by Dorothea Lange, a wonderful black and white documentary about daily life in the Ireland of the 50s. This is exactly how Peter remembers the Ireland of his parents, the Ireland of his childhood. Listening to him now in his own home, filled with newspapers and books and memories, it becomes very easy to understand his passion for preserving traditions as well as telling stories. He loves this country deeply, and Lisdoonvarna, where his roots lie. Peter Curtin is a patron of this village and the Burren itself.
And in our last moments together, he shows us where to head next and which places we „certainly can not miss!“

It was an honour Mr. Curtin. Slán go foill.
(Long life to you)