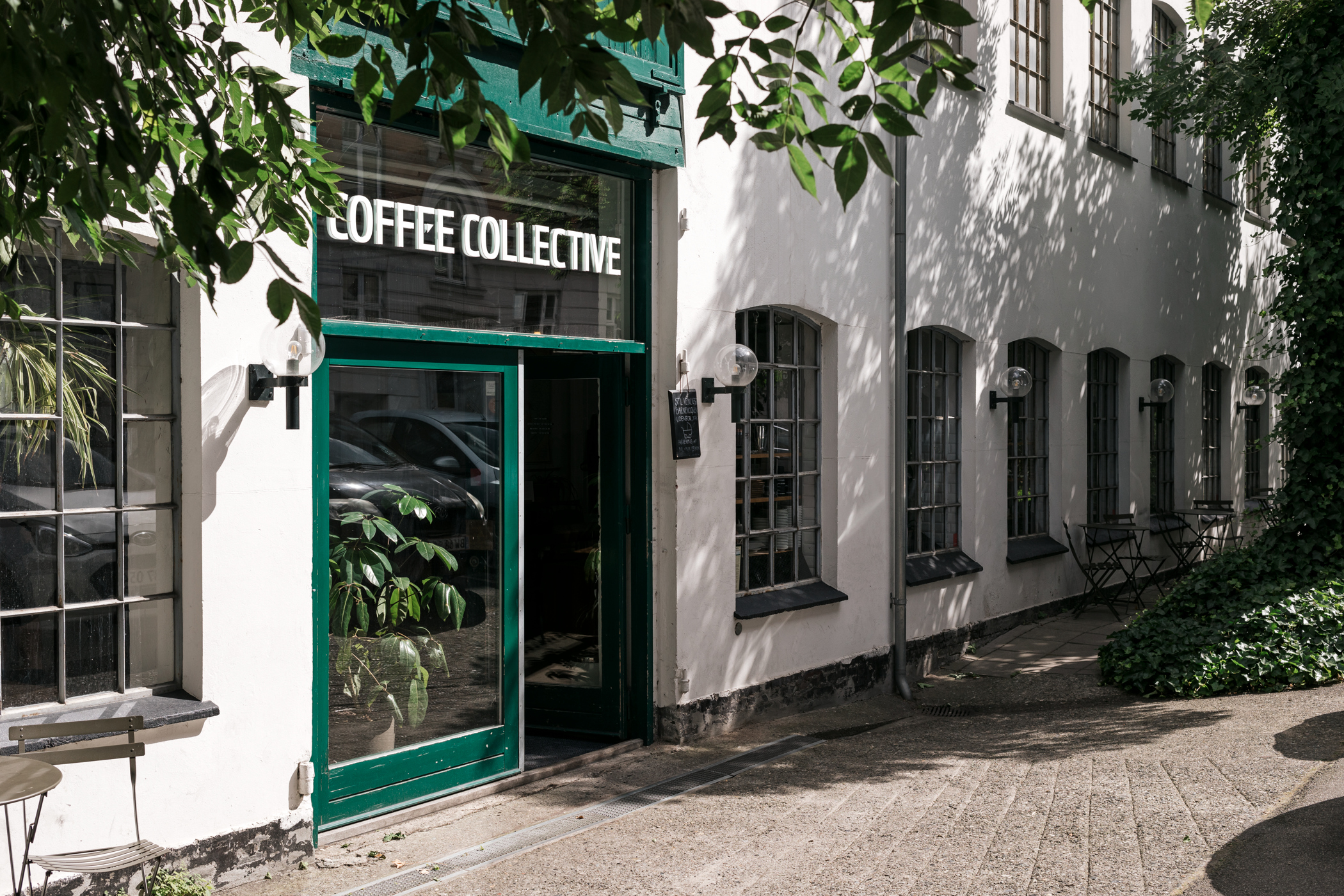 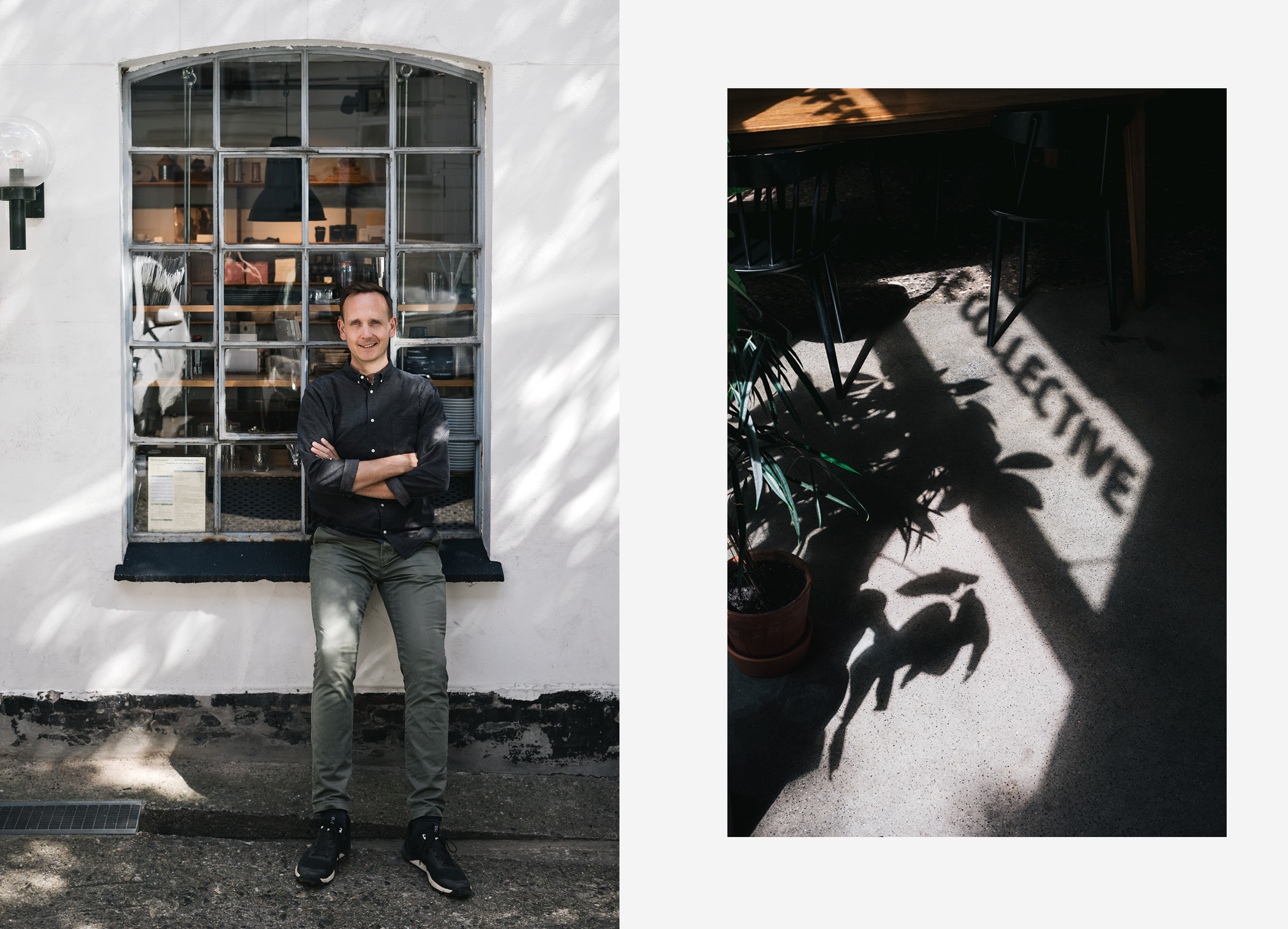 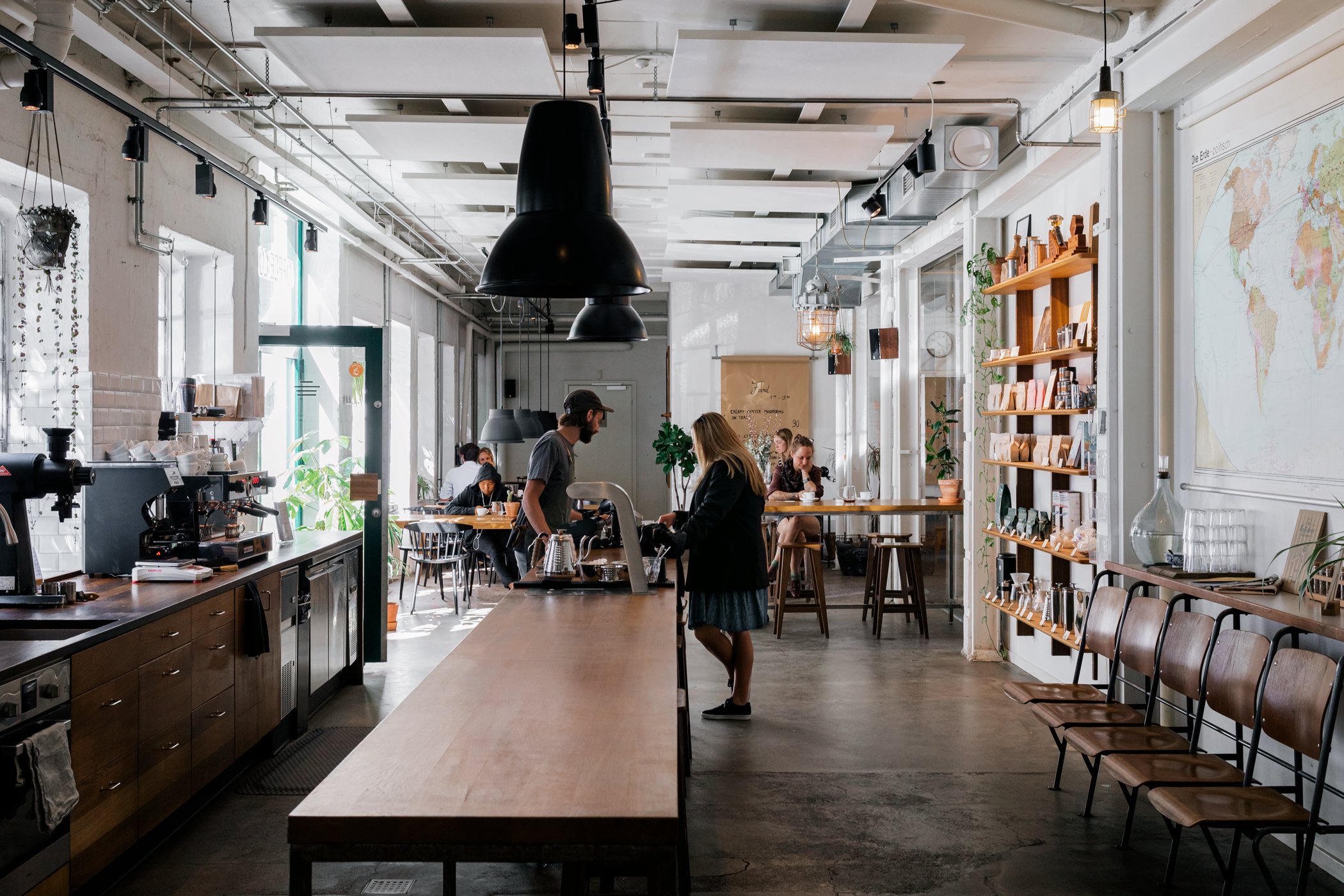 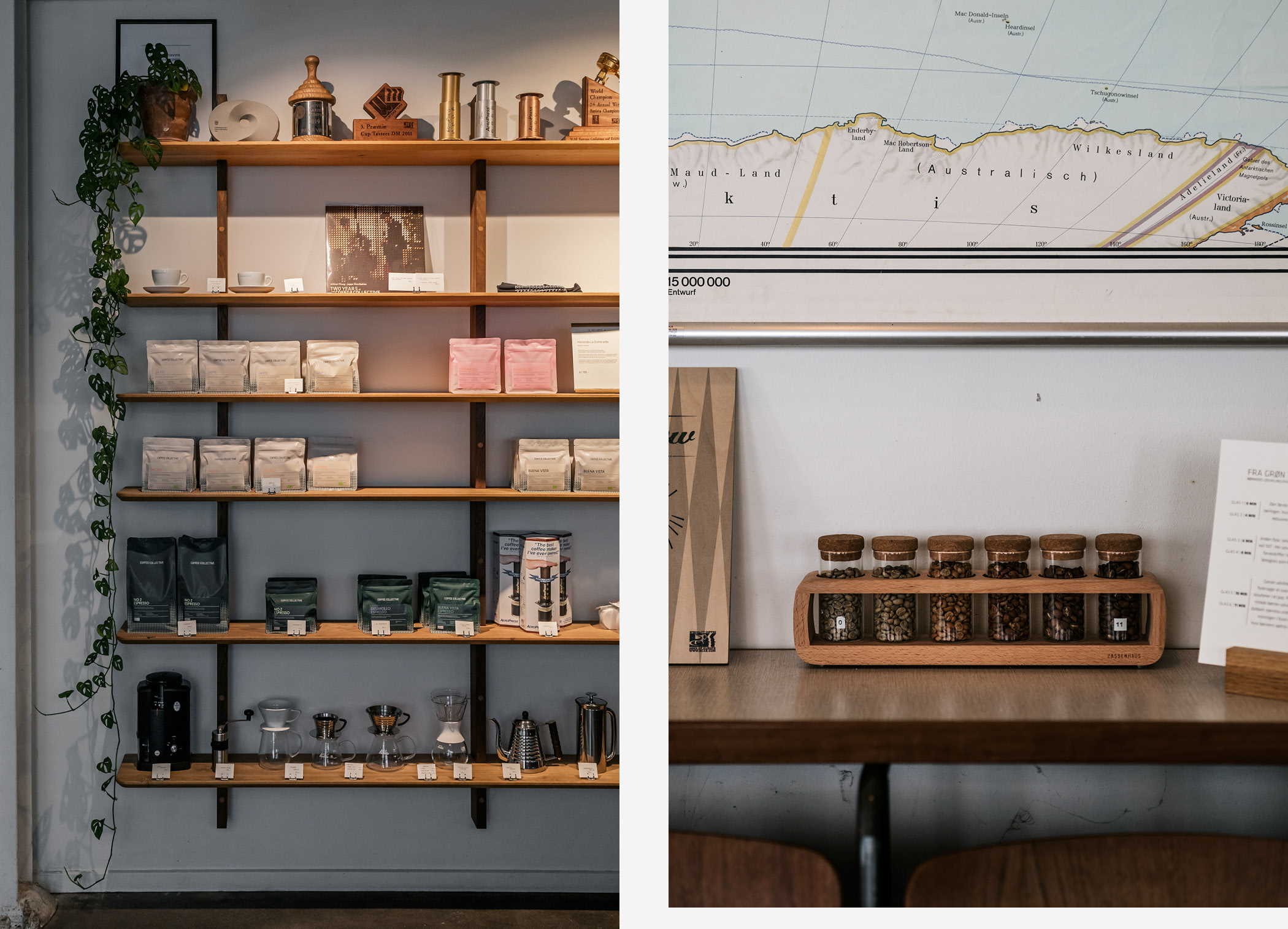 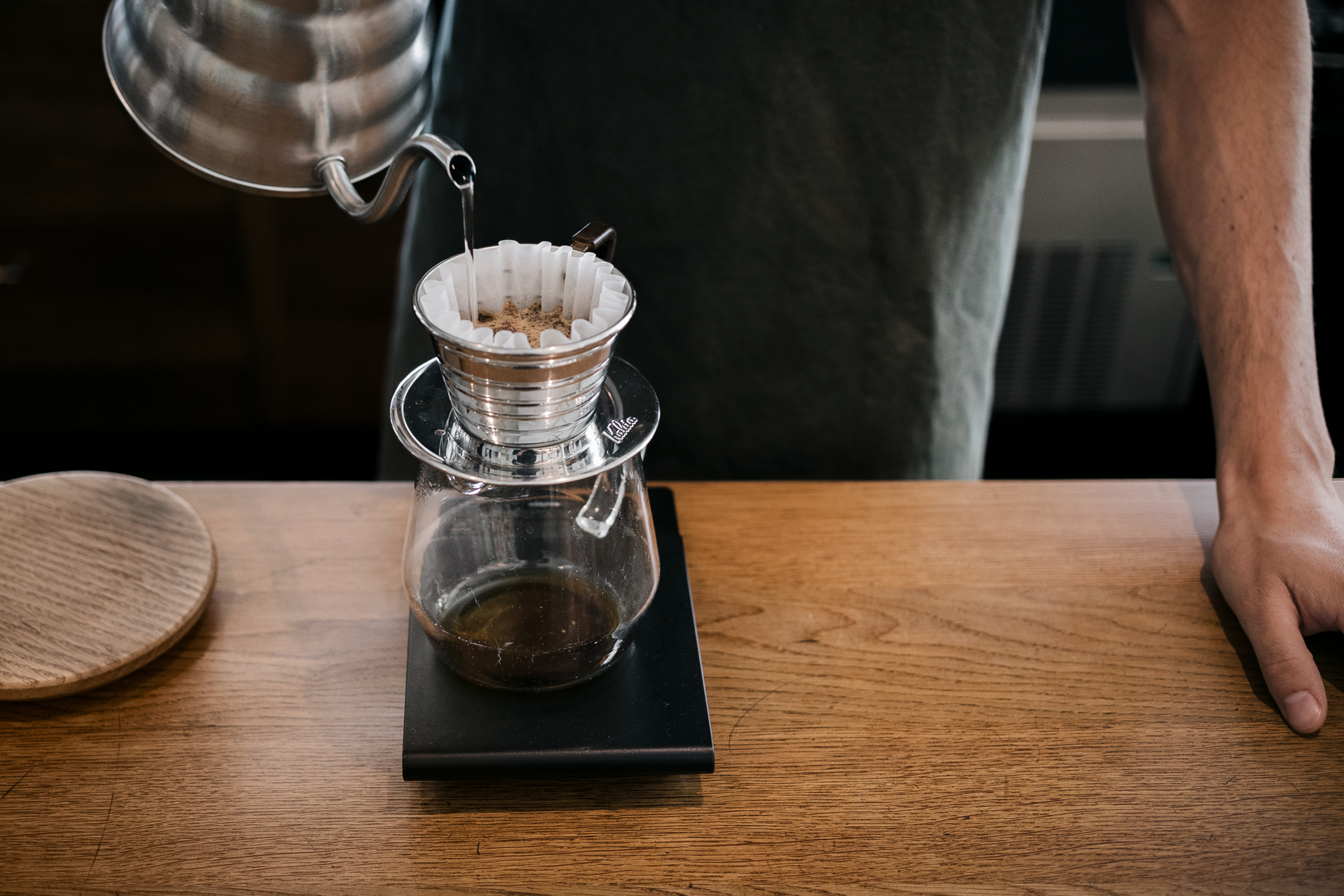 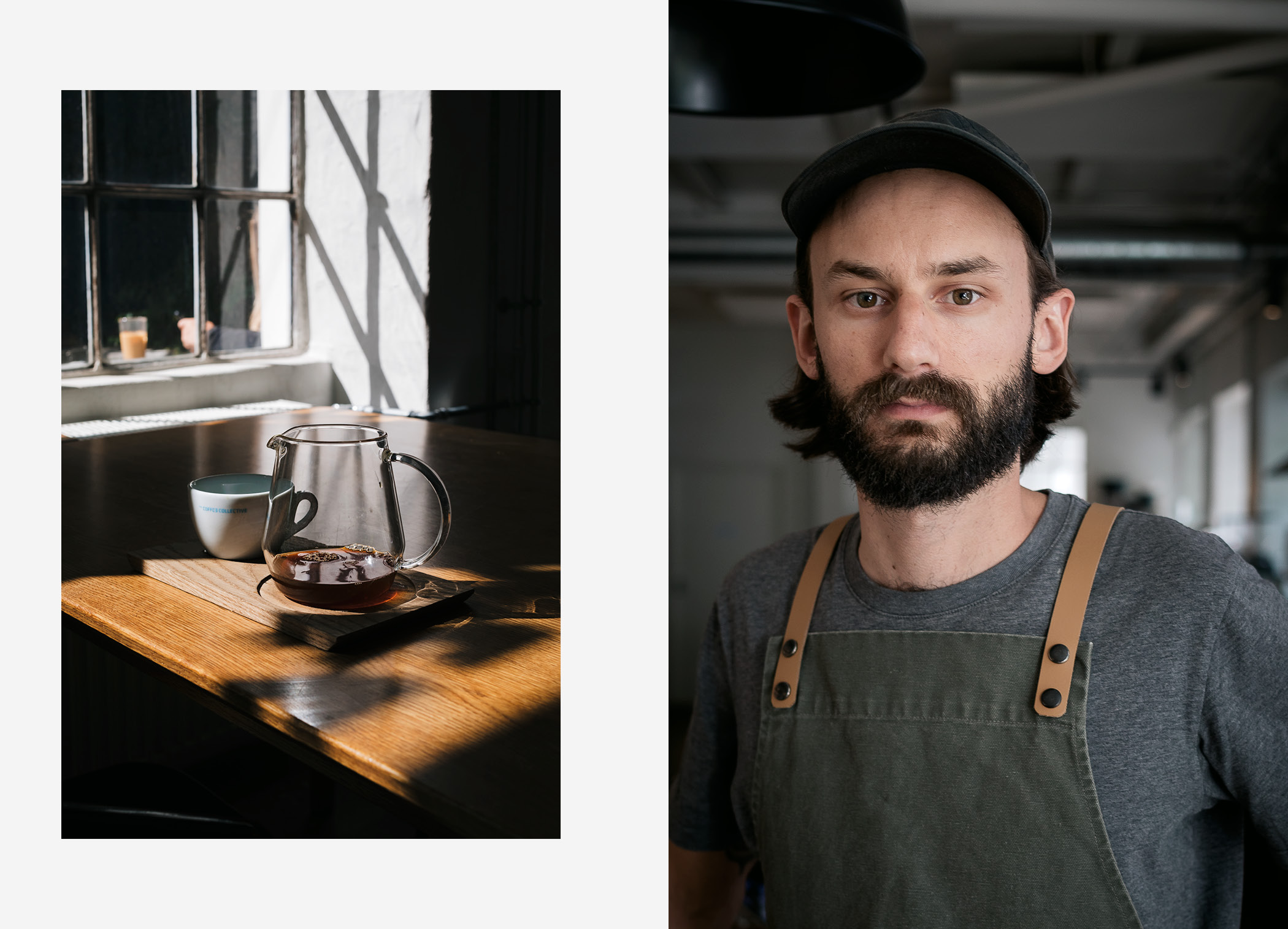 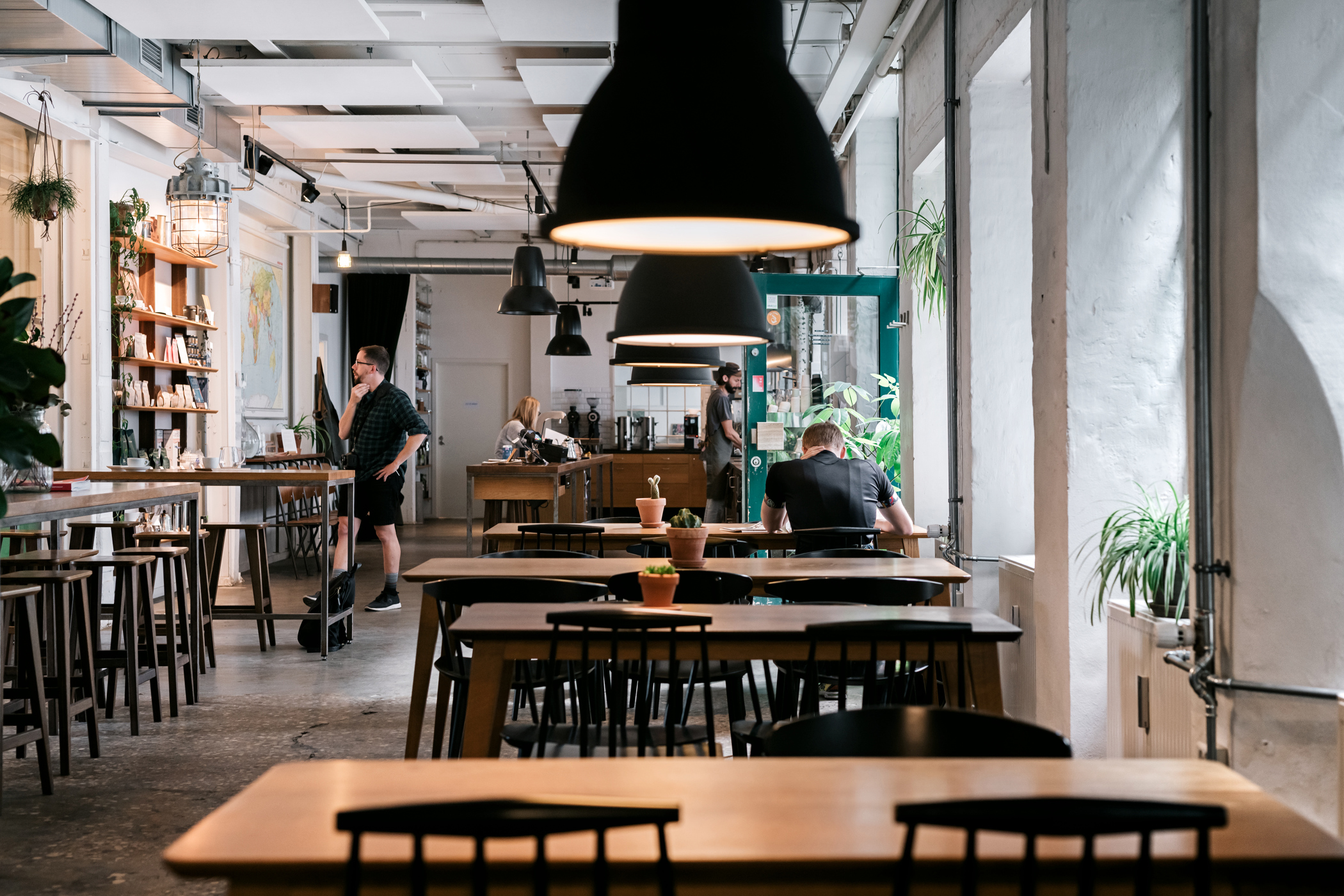 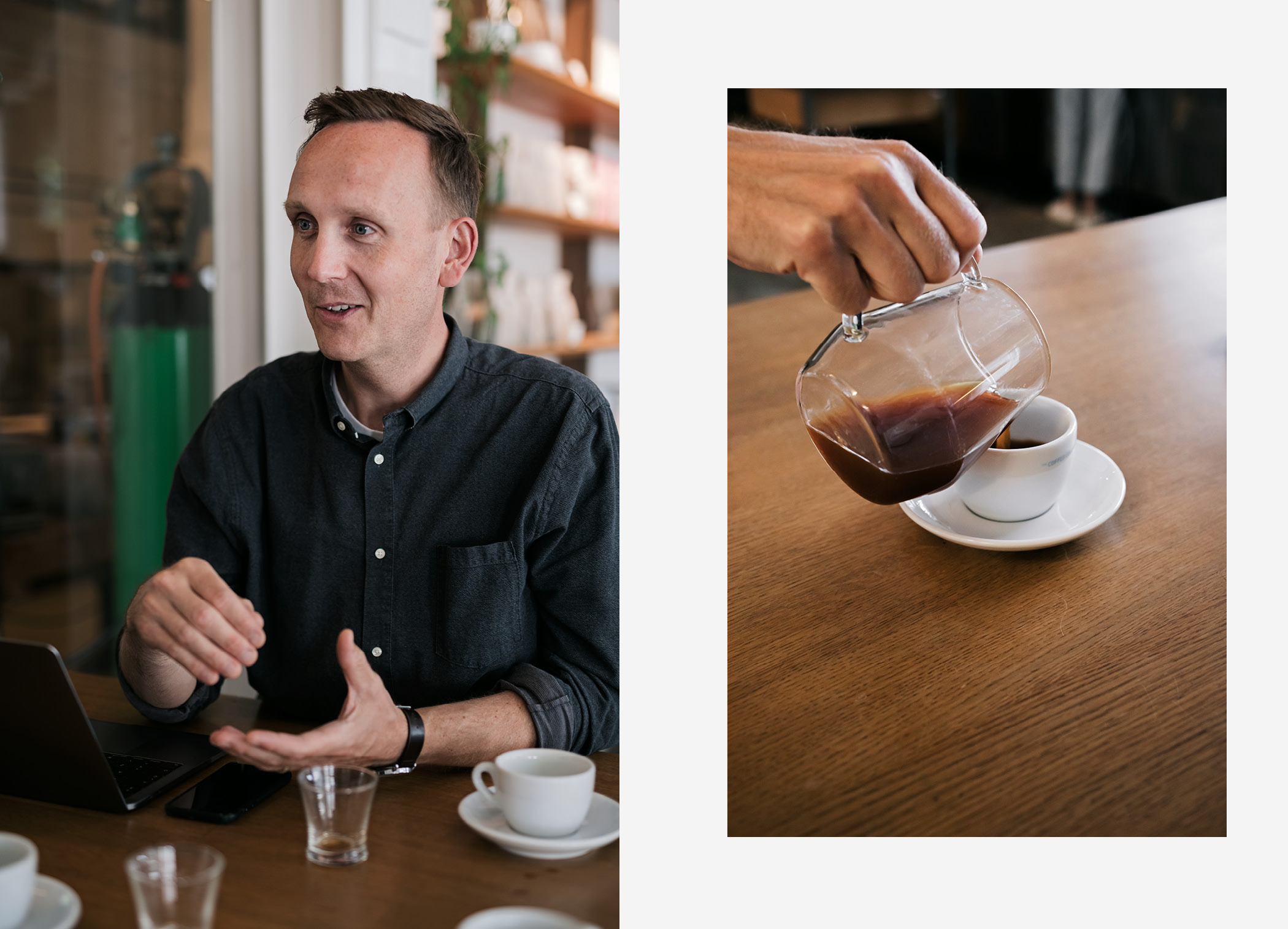 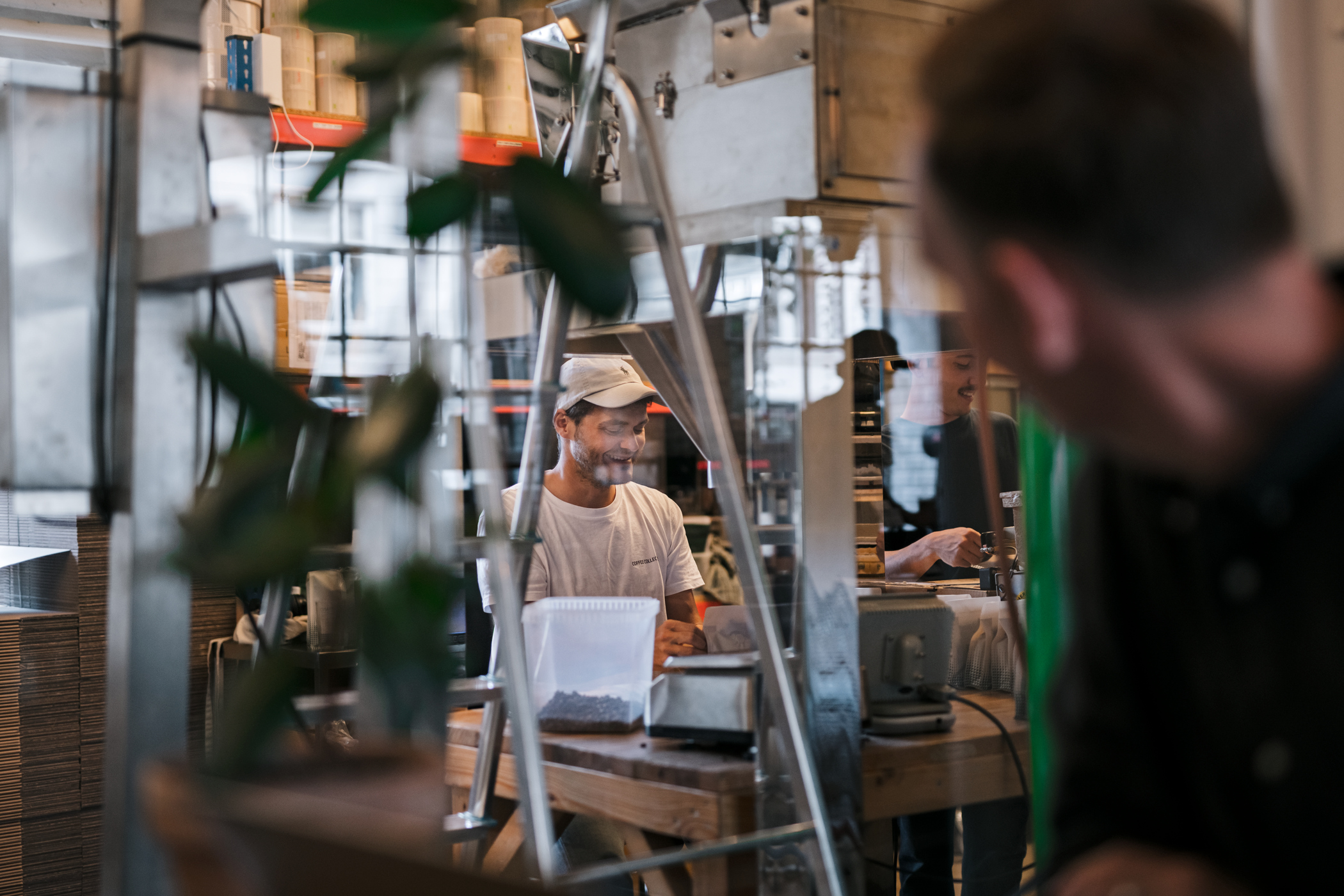 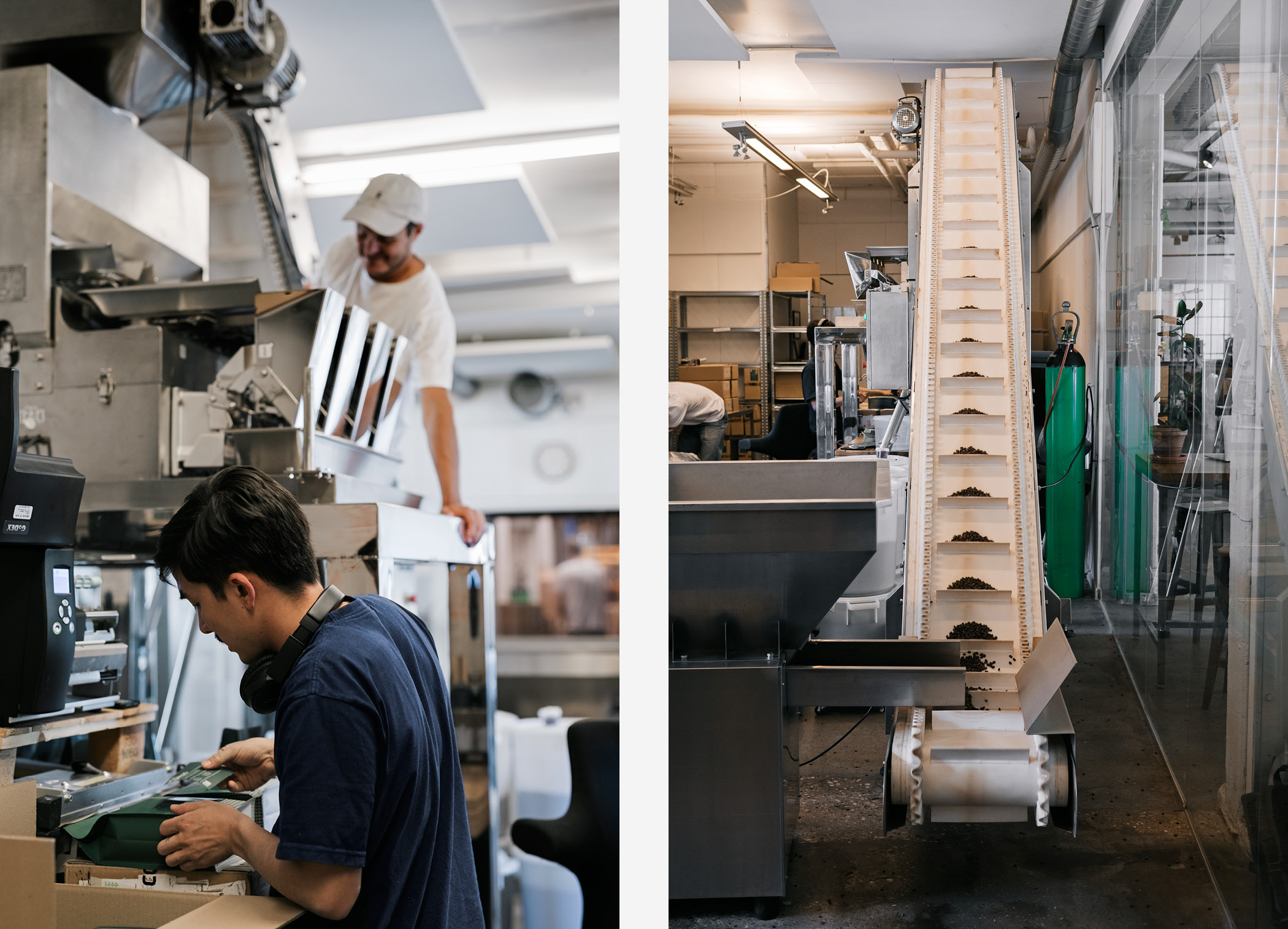 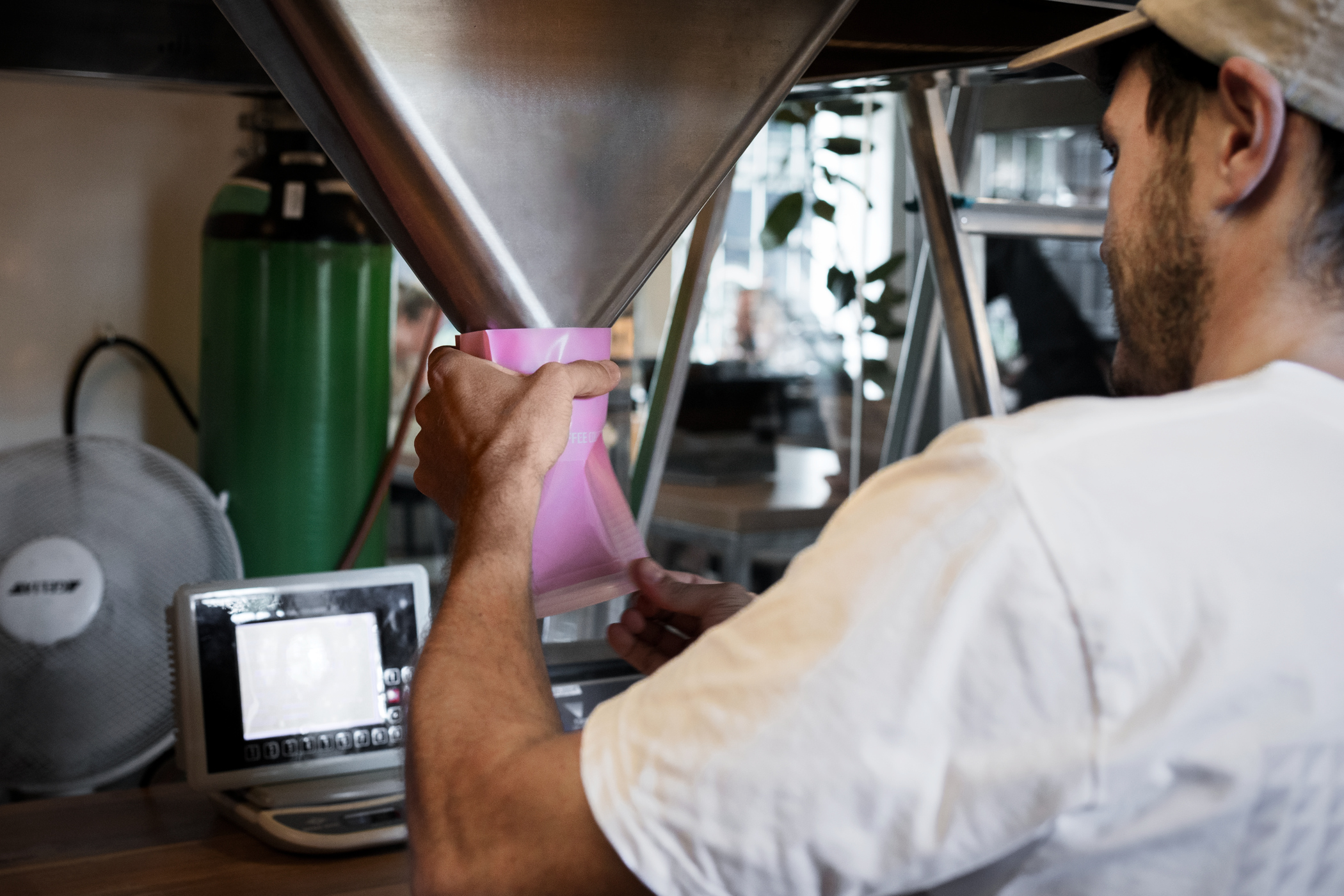 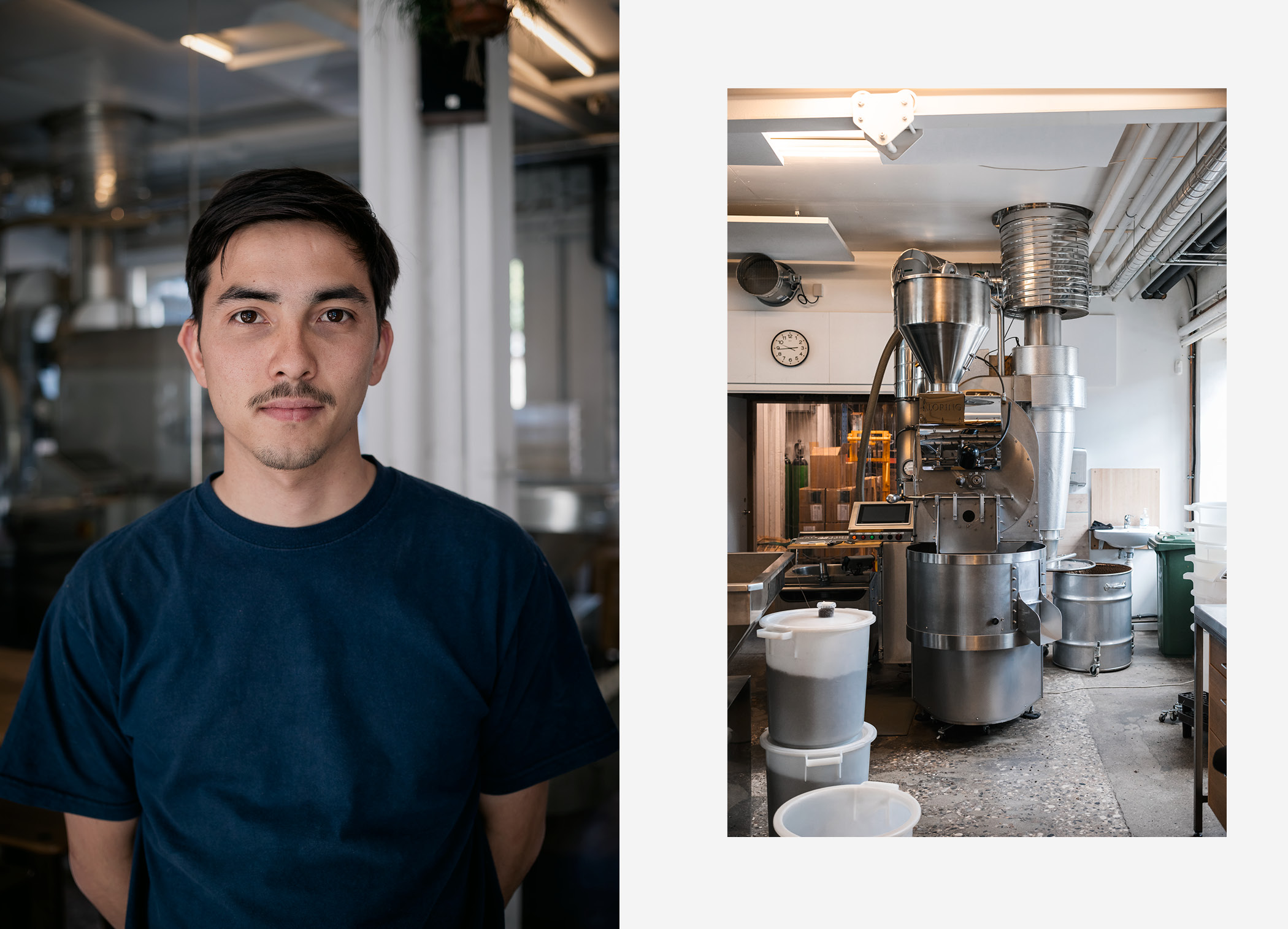 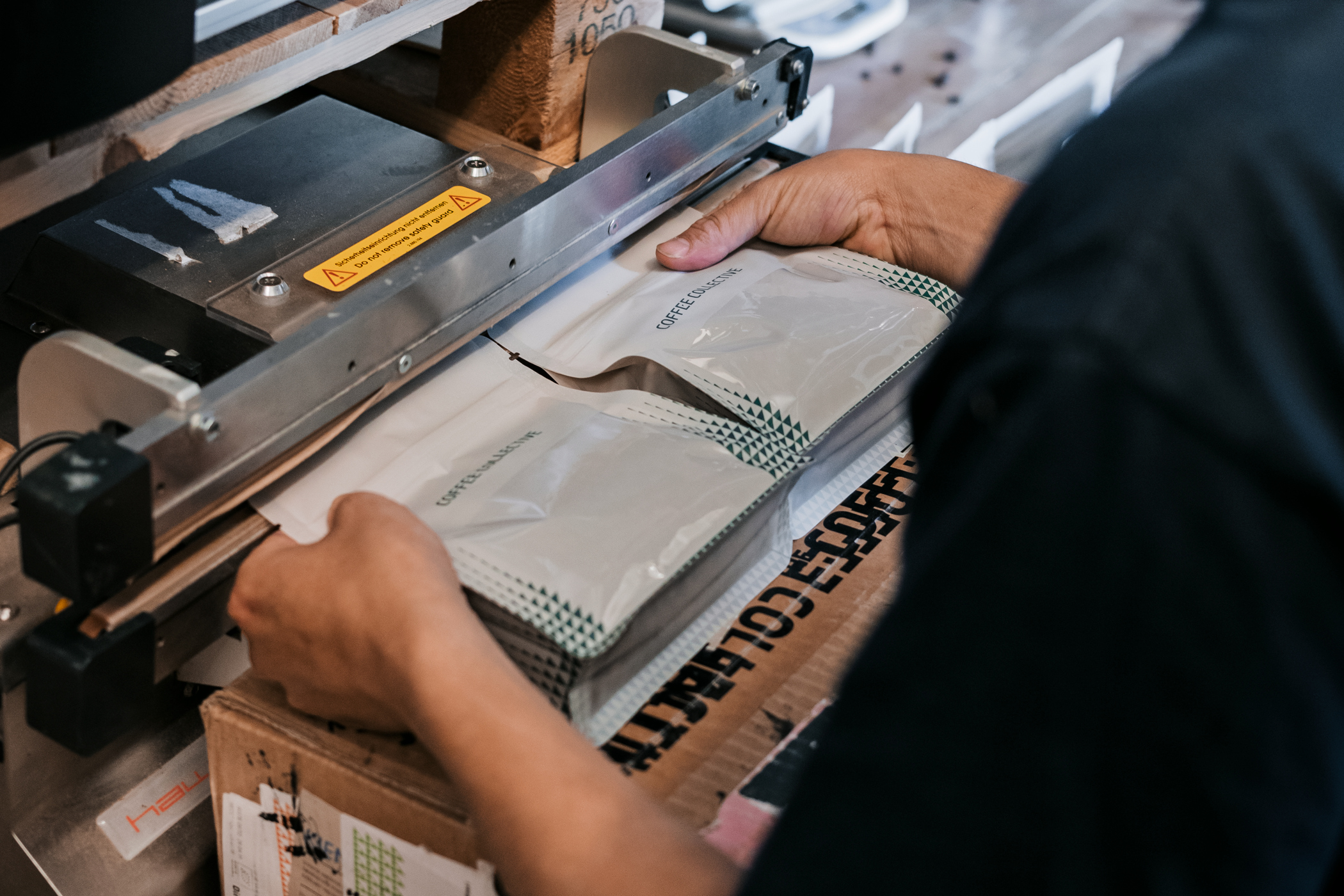 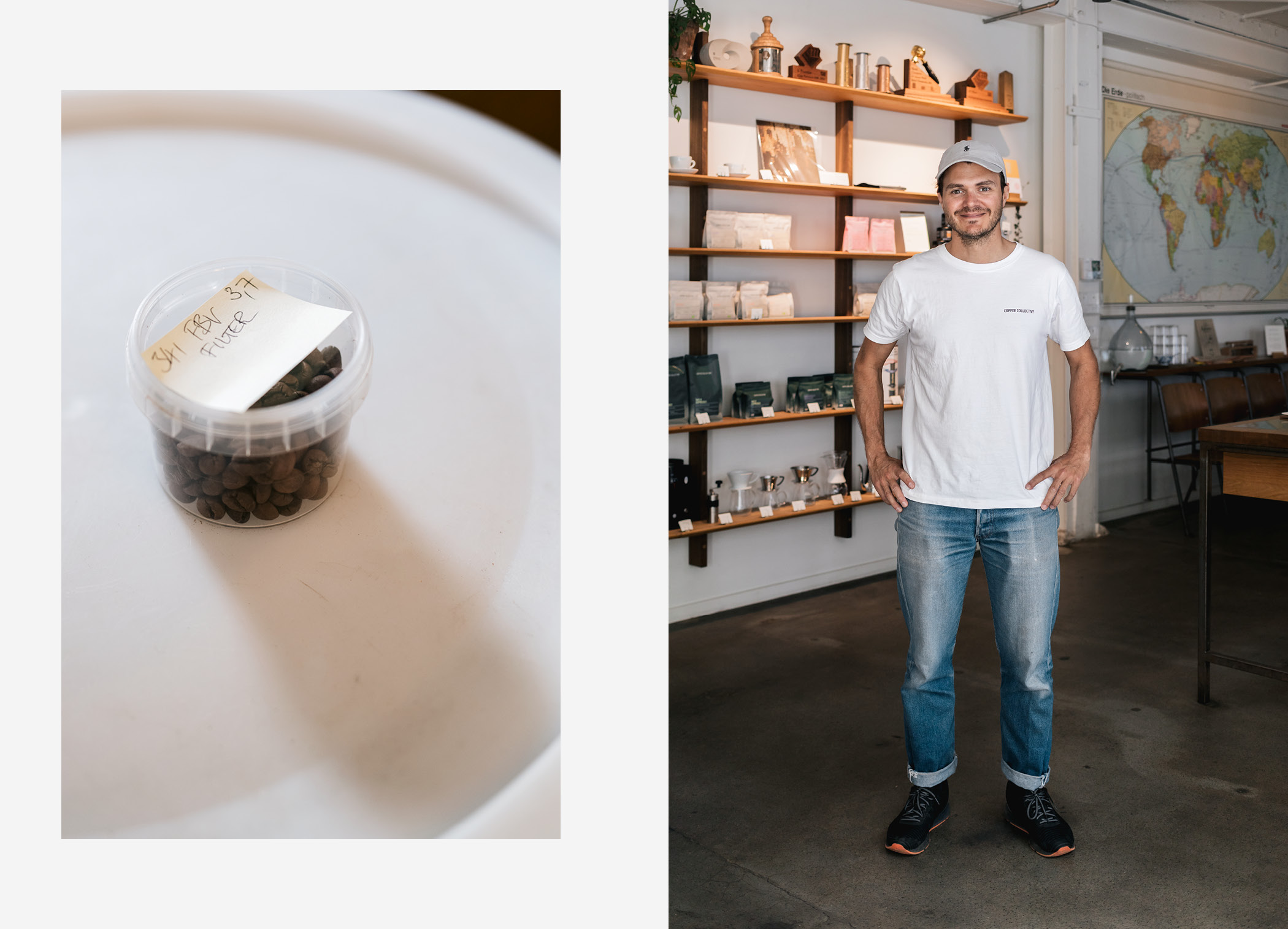 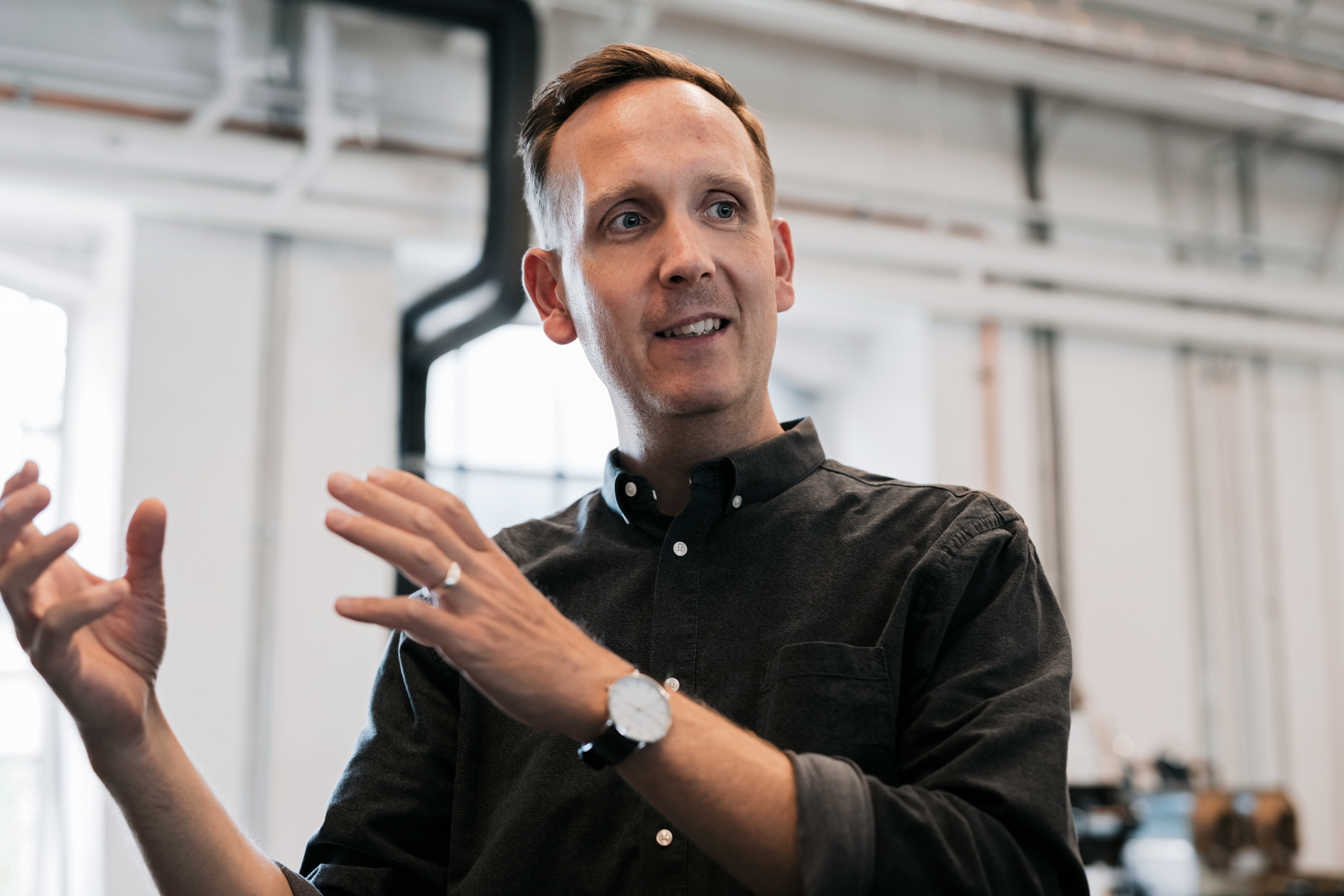 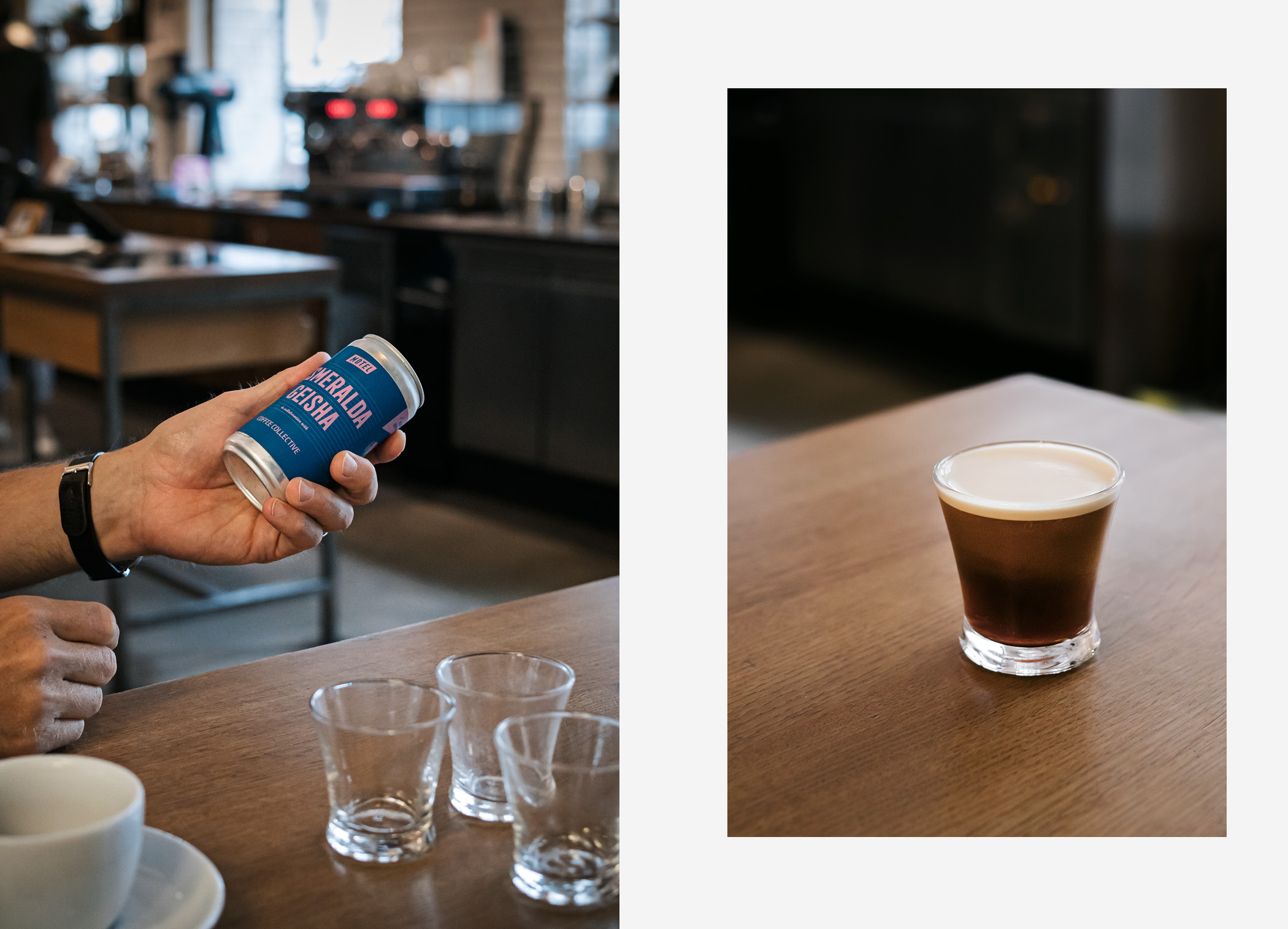 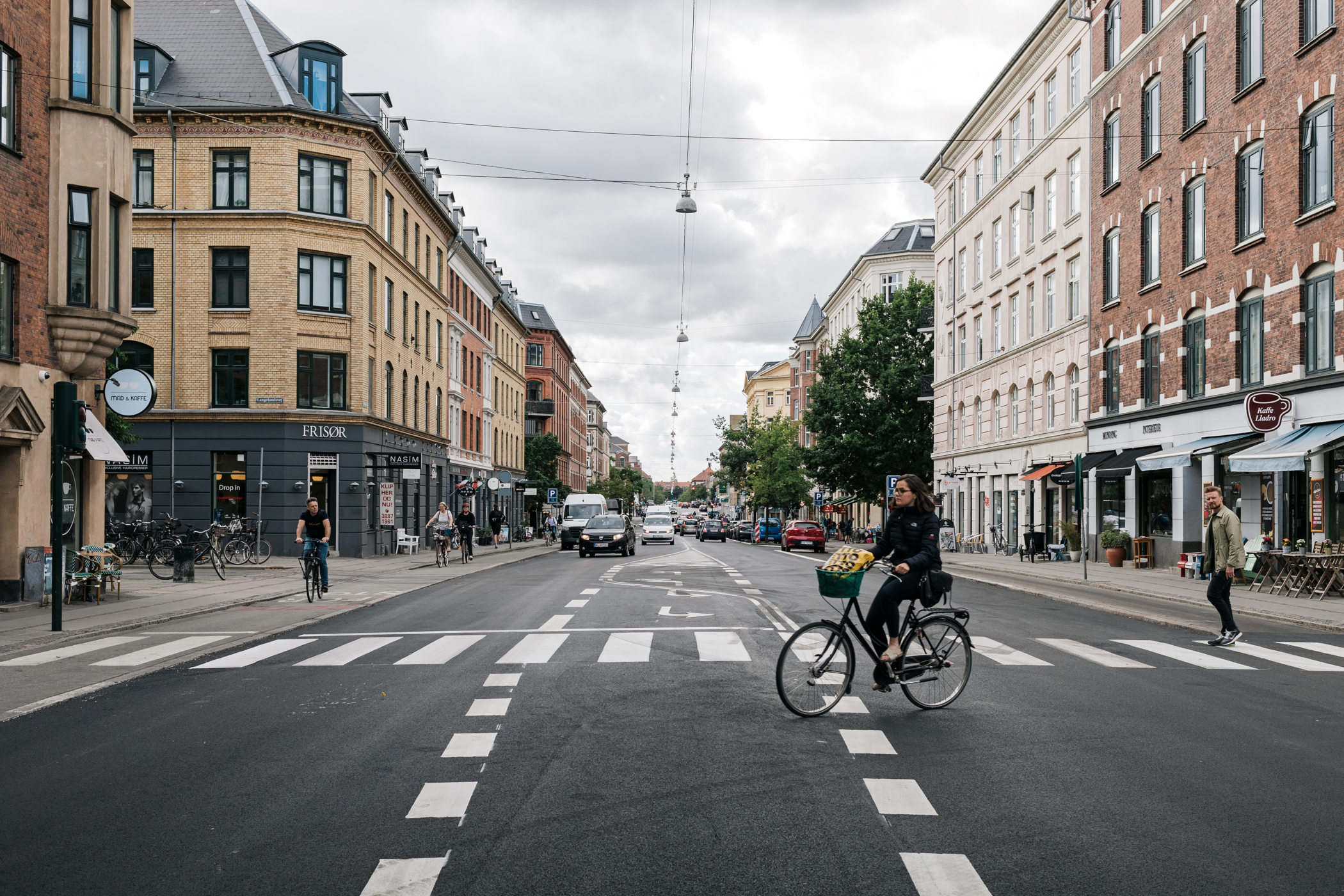 Danish roasters with a mission

We first met Klaus Thomsen, Head of Marketing & Coffee Shop Quality at Coffee Collective, at this years World of Coffee in Berlin, where he invited us to visit their headquarters in Copenhagen.
As fate wanted it, only four weeks would pass by until we met again, this time in their shop in Frederiksberg, where also their roastery and office space is located.

Klaus, Casper Rasmussen – now Roastery Manager at CC – and Peter Dupont – responsible for Green Coffee Sourcing and CEO – met while working at „Estate Coffee“ in Copenhagen, and it was after a christmas dinner in 2007, that they decided to start their own business and the story of Coffee Collective began.

While talking to Klaus about their beginnings, their core principles and the current situation of specialty coffee in general, but also in the light of climate change, we had the chance to taste three of their filter coffees, as well as the Esmeralda Geisha Nitro Coffee from a collaboration with Berlin brand MOTEL. Esmeralda is the farm that once discovered the Geisha variety and still the one holding the bar.

From the start they agreed on strong founding priciples, on which they wanted to build their business. One of these principles might have made the start bumpy, but paid out well in the end: From day one they’ve been true advocats of direct trade, which meant to be in direct relationship with the farmers, to pay them well and to make sure to provide full transparency. To avoid being told to put profit over good payment for the farmers, they also ruled out the option of investors. Back then the banks didn’t believe in the idea of specialty coffee shops and they basically forced Klaus and his co-founders to go into whole sale. So at the beginning they roasted in a storage facility in an industrial area, with no walk-in-customers and a tube out the door as a chimney. It doesn’t sound promising and it also didn’t go as good as the banks had suspected. Half a year in they faced bankruptcy. Without any more funding available, they decided to put all eggs in one basket and opened their first coffee shop at Jægersborggade in February 2008. What is part of the buzzing district of Nørrebro today, was almost a no go area back then, known for its dodgyness and drug dealers. „Looking back now, that was the turning point! Once we opened the doors, we could invite people in, they could taste what we were doing and experience how that was different from what they knew.“

Klaus is certain that you don’t need 15 great coffees to convince people and show the difference, but to provide them with a lasting experience. They have been fighting in the name of good (filter) coffee for a while and by now he feels like „we have landed that one, we succeeded and now people know, that it’s really more about the raw product, like what green coffee do you get from the farmer, how is it farmed, how is it roasted… a few basic things in terms of brewing and then it’s really good!“

In Colombia Coffee Collective is working with a group of small farmers, called „Desarollo“. There are around 150 farmers in that association and everyone is selling their coffee separately, but they also build bigger lots to sell. CC chose about 36 farmers, whose coffees showed similar taste profiles and scored similarly, and blend them to one lot – which makes it more worthwhile for both sides to process. Often the small farmers don’t own enough land to make a profitable business and since the market price for coffee plummeted and reached a level often times below the cost of production, some decisions really are about survival for the farmers.
This is where the „quality bonus“ comes in, the newest information added on the re-designed coffee bags of Coffee Collective: It shows the percentage that CC paid over the market price for each particular coffee. It reads 151% on the Colombian, up to 419% on Kieni from Kenya!

That said: Coffee Collective may not have the widest selection, but they choose very particular, based on their core values and how a coffee is sourced.
„For us it’s not really about having pins everywhere on the map. In the beginning, because we wanted to buy direct from the start, that also limited how much we even could buy! So we started with only two direct trade coffees: Finca Vista Hermosa  from Guatemala and Daterra from Brazil – who we still buy from today – and then we bought a third from Kieni in Kenya and we’ve actually been buying from that corporate in Kenya for nine years now! We only take on a new origin, if we have sufficient amounts on each of them to provide value the other way.“

Most of the small farmers harvest once a year, so CC has to buy everything for the coming year at once. According to Klaus stable temperatures are key to maintain the quality. Luckily their storage space is in the basement, and thus naturally cool. From there they only bring a palette at a time to an air-conditioned room at the roastery. Additionally all the beans are either in „Grain Pro“ bags or vacuum packed – it really is one important step of many to maintain and provide the quality of the worlds best coffee from bean to cup. Next step – and a big one – is the roasting of course. A very nice detail for us was that the roaster is only divided from the coffee shop by a glass wall, so you can actually watch how the coffee is being roasted while sipping your cup. „Our old shop was literally a tiny room and we had the roaster in the middle and people were all sipping around the roaster. It was super fun, but then at the end of it, it was also super loud, smoky and super hot… When we moved here, we wanted to keep the transparency of that process and the feel that you are a part of it and you can see what actually goes on. In the end a lot of people have never seen green coffee!“

After having worked with 12kg Probat roasters, they needed to increase their capacity when they opened at Torvehallerne Food Market. They decided on a „Loring“ roaster, on which you can dial in custom roasting profiles and control the whole process really well and with much more precision. As it also uses the energy much more efficiently (it recirculates the air and burns the smoke simultaneously instead of using an external afterburner) and thus has a much lower pollution rate, to choose the Loring was very obvious for Klaus, Casper and Peter.

After talking to Klaus for a while it becomes quite clear, that for them it really is a matter of doing things differently and doing them the best they can. They are not trying to sneak in some green sustainable words and stamps into their companies profile, they live it and choose the hard road if need be. It’s all about the impact you can have. Saying that, Klaus is aware of the long way ahead, but still optimistic as the goal is clear:
„It’s so interesting, that everything that we do – the small coffee shops, the small roasteries – get’s copied by the big companies like Nespresso. So I have the hope, that if we put that issue up about prices and transparency and if we continuously push this message, that the consumers will start to demand that! That they think about it and ask questions! And imagine we could get them, instead of copying a cool drink, but to get them to copy a better way of sourcing coffee, a better way of providing value downstream!“

And while companies such as Starbucks have played an important role to open up the market to a lot of people, make them interested and also raise their will to pay more for a cup of coffee, we are currently stuck in a really weird situation: On one hand the market prices are so historically low, that it becomes a matter of survival for many producers, whereas at the same time consumers are apparently willing to buy coffee and to pay for it. Klaus himself can’t really grasp how fast their Esmeralda Geisha sold out, even though they’ve ordered more than ever before.
So although there is an appreciation, the broken market is making it hard to get the message across. Coffee has simply gotten way to cheap for the big players. Now the customer demand has to be the motor to shift the level of appreciation and value for coffee again – as a craft, but also as a limited good, especially in times of climate breakdown. Klaus agrees that climate change is a topic for all farmers they work with. Changing weather patters, like erratic rainfall and long droughts, that also promote plant diseases, are having a huge impact on volume and quality of crop. And the rising temperatures are a main factor on the quality as well, as Klaus explains: „Coffee grows best at around 20-21° average temperature. If that goes up just 1°, it’s a significant loss of quality! Because the ripening stage decreases, it ripens faster and like everyone knows probably with apples and other fruits: if it’s fast, it just lacks complexity.“

Coffee Collective is also holding talks and lectures on events of the global coffee industry, which offers a good way to address topics like price transparency to a bigger audience. And Klaus told us, that they are seeing both, the need for change on many different levels, but also the slowly accelerating process of changes being made and of a raising awareness in industry professionals and home consumers alike.

In Italy for example, where the coffee prices basically didn’t change in 20 years and where Espresso regularly costs about 1€, he met a new generation of roasters and baristas, excited and willing to break up old habits and try out new things, that haven’t been popular so far, but providing better Espresso as well, so that the beauty of the classic Italian Coffee Culture doesn’t get lost in the process.

Or in 2018, when he gave a talk in Portugal, where the coffee prices are similarly low as in Italy, he was confronted with clear opposition from other roasters, that told him he cannot simply „go out and choose to pay more“. But these are the exact moments, in which he chooses to follow his beliefs but also his business model, so he plainly told them this: „You know what? Somebody has to start! And you have to get consumers involved! It can’t be you taking on the burden all alone – so just have a little faith in consumers as well! If you really have a good product, something that provides more value, a better experience, something that tastes fantastic, good customer service and a story behind the product: I really think most consumers are actually willing to pay more for that!“

In the end we agreed that there are many challenges to tackle, but also that the cup of coffee always is half full.
So get out there, spread the message about good coffee and if you haven’t ordered already, get yourself some Coffee Collective beans. Or visit them in one of their four shops in Copenhagen. It really is damn good coffee, we’re sure you’ll agree.